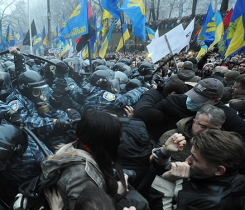 Protesters and riot police clash in front of the Cabinet of Ministers of Ukraine during a rally in Kiev on November 24, 2013. (RIA Novosti / Alexei Furman)

With fast-moving political and military developments in Ukraine, civil society is urging the country’s lawmakers to build on the momentum of a recent vote in favor of an ICC investigation into alleged recent crimes against protestors by becoming a full member of the Court.

A vote for the ICC
On 25 February, just days after the ousting of former President Viktor Yanukovych, 339 of 450 MPs in Ukraine’s parliament voted to use a special mechanism to recognize ICC jurisdiction to allow its prosecutor to investigate and prosecute alleged crimes against humanity committed between 30 November 2013 and 22 February 2014.

The resolution alleges that Yanukovych and other high-level government officials are criminally responsible for ordering government forces to commit murder, unlawful deprivation of physical liberty, torture, and enforced disappearances against civilian protestors.

While an ICC investigation is by no means a foregone conclusion, the fact that the vote was one of Ukraine’s first considerations in the wake of Yanukovych’s departure demonstrates that justice is a key priority and that the nascent Court is now looked to by many as the international body capable of addressing mass human rights violations wherever they may occur.

Civil society urges Rome Statute ratification
Ukraine signed the Rome Statute in 2000 but has yet to join the ranks of 122 other states that have ratified it. In April 2013, it was the focus of our  Campaign for Global Justice calling on the government to take the necessary steps to become a full ICC member.

Make justice happen!Join us in calling on #Ukraine and #Cameroon to join #ICC and #endimpunity http://t.co/JtfEK9ZQZZ pic.twitter.com/Aujju6sIhA

In the wake of the parliamentary vote, civil society groups in the country urged Ukraine to join the Court, a sentiment echoed by Coalition members No Peace Without Justice and Parliamentarians for Global Action. Roman Romanov of the International Renaissance Foundation in Ukraine:

“Ukraine has never experienced such grave human rights violations before. The Ukrainian people don’t want to have to choose between selective justice and impunity. The national justice system is very weak and it played a significant role in monopolizing the power of Yanukovych’s political regime. Hence the will to have the ICC investigate. But Ukraine should nevertheless take all the necessary steps towards full ratification of Rome Statute as soon as possible.”

The increased political tensions and military build-up in the country have made ratification, with the protection that ICC membership provides, all the more urgent. The ICC has jurisdiction over crimes committed on the territory of a member regardless of the nationality of the perpetrators.

Special mechanism to accept ICC jurisdiction
For non-ICC members such as Ukraine, there are just two ways for the Court to exercise jurisdiction:

The parliamentary resolution makes reference to the second option—known as an ‘Article 12.3 declaration.” However, no formal declaration has yet been made at the ICC.

Some, including blogger Nikolai Holmov, have questioned whether any formal declaration accepting ICC jurisdiction would even be possible under Ukraine’s present constitution.

The main stumbling block was deemed to be the ICC’s complementarity principle which stipulates that its jurisdiction is complementary to national criminal jurisdictions. This means the Court would only intervene if national courts were genuinely unable or unwilling to investigate and prosecute. Ukraine’s constitution gives national courts the exclusive competence over the administration of justice, and forbids the delegation of that competence to other bodies or officials.

Thus it appears that this constitutional court ruling could also make an Article 12.3 declaration null and void. Others disagree, saying that the ruling would have no bearing on a temporary acceptance of ICC jurisdiction.

First, the prosecutor would make an initial assessment of any communications received on alleged crimes in order to filter out all information on crimes outside the jurisdiction of the Court.

Next, an analysis of issues of temporal and geographical or personal jurisdiction would be conducted, and an analysis of alleged crimes within the jurisdiction of the Court. The third step considers admissibility, as per Article 17 of the Rome Statute.

Article 17 is the crux of the complementarity regime, as it lays out the conditions for when cases would be considered inadmissible due to investigations and prosecutions at the national level.

The explanatory note attached to Ukraine’s parliamentary resolution alleges that the then-prosecutor general, Viktor Pshonka, had not investigated nor initiated any prosecutions of the alleged crimes, which if true could address most of the admissibility thresholds.

The Court would need to consider whether this was due to an unwillingness or inability to do so, with the latter condition being due to a total or substantial collapse or unavailability of its national judicial system.

Given the current state of affairs in Ukraine, some have argued that national institutions are unavailable to conduct such investigations and prosecutions, although this has not prevented the issuance of an arrest warrant  against Yanukovych on 24 February for mass murder.

The crimes against humanity cited in the parliament’s resolution must also be determined to have been committed as part of a widespread or systematic attack in order to be considered of sufficient gravity to justify further action by the Court – a threshold which some commentators, such as David Bosco and Mark Kersten, have already questioned as being unable to be met.

Finally, the prosecutor must consider whether an investigation would not serve the interests of justice, a notion that has not been defined by the ICC, but which likely would take into consideration whether the investigation would hamper the prevention of future serious crimes and the guarantee of  lasting respect  for  international  justice.

If, after all of these analyses, the prosecutor concludes that there is a reasonable basis to proceed with an investigation, she must request authorization to open an investigation from judges of an ICC pre-trial chamber. Needless to say, this has the potential to be a lengthy process.

Amend, ratify, implement
It is clear that Ukraine needs to build on the momentum of the recent parliamentary vote by amending the constitution as soon as possible to allow for compatibility with the Rome Statute.

Encouraging signs have come from Ukraine’s ambassador to the United Nations, Yuriy Sergeyev, when he stressed that “we must ratify the Rome Statute” following a Security Council meeting in February.

By so doing, uncertainties around the Article 12.3 declaration from a constitutional perspective could be put to bed. Better still, such a move would set Ukraine on the path to becoming a full ICC member and provide it with the protective legal framework to ensure that crimes that shock the conscience of humanity do not go unpunished.

Civil society stands ready to assist Ukraine with every step towards ensuring that cultures of impunity are replaced with cultures of accountability.

Have your say: What role do you think the ICC could or should play in Ukraine?

This entry was posted in Europe, Ratification and Implementation of the Rome Statute, Uncategorized and tagged Article 12.3 declaration, ICC, preliminary examination, ukraine, Yanukovych. Bookmark the permalink.