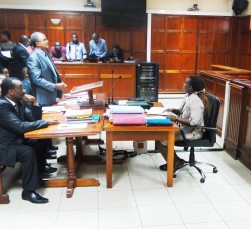 Representing the petitioners, advocate Tim Bryant introduces the parties before the court at the beginning of the sexual and gender-based violence. © ICJ-Kenya

Hearings began in a suit brought by eight Kenyan sexual violence victims alleging that the government has failed to investigate and prosecute sexual and gender-based crimes allegedly committed during the 2007-08 post-election violence.

International Commission of Jurists-Kenya and Physicians for Human Rights, the Coalition on Violence Against Women and Independent Medical-Legal Unit are also party to the case. Physicians for Human Rights told AFP that the Kenyan government has the responsibility to investigate and prosecute sexual violence. Over 900 victims are believed to have faced sexual attacks during the post-election violence. To date no one has been charged by the authorities. 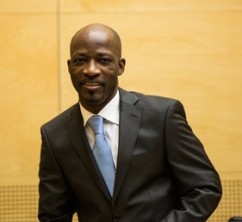 Charles Blé Goudé at his first appearance at the ICC. © ICC-CPI.

ICC Prosecutor Fatou Bensouda and Amnesty International welcomed the move, as did the the Côte d’Ivoire Coalition for the ICC while urging “the government to hand over others named by the court including from the pro-government camp.” However, supporters of former president Laurent Gbagbo said that the transfer would hurt reconciliation efforts, while the International Crisis Group’s Rinaldo Depagne argued that it came in response to allegations of Blé Goudé’s poor treatment while in detention.

Amnesty International called on the European Union to urgently deploy peacekeepers to stop fresh violence in the CAR, where Human Rights Watch said that there is an urgent need to end impunity. The EU said that it hopes to be able to deploy troops soon. Peacekeepers opened fire on a crowd in Bangui to disrupt anti-Muslim violence and nine people were killed in clashes over the weekend. The African-led International Support Mission to the CAR condemned unprovoked attacks on its staff and said that its forces will treat the anti-balaka militia as the enemy. The ICC prosecutor was granted additional time to prepare a case against Jean-Pierre Bemba and four others accused of forging evidence and bribing witnesses.

Kenyans are organizing local community meetings with post-election violence perpetrators in order to promote reconciliation. Christopher Gitari of the International Center for Transitional Justice said that such meetings are not a complete solution, while human rights activist Njonjo Mue cautioned that they are not sufficient to deliver justice. Kenyans for Peace with Truth and Justice’s James Gondi told GlobalPost that Kenya’s government has focused solely on defeating the ICC cases, while Western governments have not held them accountable. Victim’s lawyer Fergal Gaynor said that he would be open to the idea of a plea deal in the case against Kenyan president Uhuru Kenyatta. Meanwhile, a former ICC witness against Deputy President William Ruto is reported missing, possibly kidnapped. ICC Prosecutor Fatou Bensouda wants the Ruto/Sang trial to proceed in closed sessions when it resumes next week.

ICC fugitive Sudanese President Omar Al-Bashir reportedly traveled to Kuwait this week to attend an Arab League summit. The ICC prosecutor alerted judges that Al-Bashir is expected to visit Chad, an ICC member state with an obligation to arrest suspects, this week. Human Rights Watch called on the Sudanese government to end renewed ground and air attacks against civilians in Darfur. The head of UNAMID said that paramilitary attacks on Darfur villages are an “ugly blemish” on peace efforts in the region. New satellite images show destruction to Darfur villages. South Darfur IDPs hid in a UNAMID base after coming under attack from militias. Ten people were killed in militia attacks in North Darfur, where over 10,000 livestock were stolen by Janjaweed forces in the past week. According to the UN, aid groups face growing restrictions in Darfur, while the Darfur Bar Association told Radio Dabanga that 15 Daruri students and activists have been detained by the Sudanese government.

The International Refugee Rights Initiative’s Olivia Bueno wrote that citizens in the DRC’s eastern Ituri district view the recent Germain Katanga conviction as a limited success. Two witnesses willtestify on behalf of Thomas Lubanga in a hearing on 14-15 April as part of his appeal against his conviction.

Libya’s national congress amended the country’s laws to allow Saif Gaddafi to be tried via video link in a national Court. The trial of Gaddafi, Abdullah Al-Senussi and other former officials is set to begin in Tripoli on 14 April. Academic blogger Kevin Jon Heller criticized the ICC for inaction on the Libyan cases.

A UN expert faulted the Ivorian government for prosecuting only those on the side of former president Laurent Gbagbo and called on the government to expedite the national trial of Simone Gbagbo, who is also wanted by the ICC.

Ugandan President Yoweri Museveni ordered investigations into alleged abuses committed by the Ugandan military during the war against Joseph Kony’s Lord’s Resistance Army. The United States is sending more resources to aid in the hunt for Kony, while the Ugandan military said the ICC suspect is hiding in the CAR. Former ICC prosecutor Luis Moreno-Ocampo offered to renew investigations into the Uganda’s 2004 Barlonyo massacre and represent the victims at the ICC. Kevin Jon Heller considered whether Moreno Ocampo could do so. The former prosecutor also said that he supports a new ‘story-telling’ campaign to promote healing among LRA victims.

Human Rights Watch called on Mali to investigate abuses committed by all sides during its recent conflict.

Human Rights Watch called on the Taliban and other insurgent groups in Afghanistan to stop targeting civilians following an attack on a Kabul hotel. Amnesty International accused Colombiaof failing to stop human rights abuses despite progress in peace talks with FARC rebels. Nigeria’s Borno State closed schools due to the fear of Boko Haram attacks. Nigeria’s government relief agency said that over three million people face a humanitarian crisis due to the Boko Haram insurgency. The United States expressed concern that Georgia‘s government is calling in former president Mikhail Saakashvili for questioning in multiple criminal investigations. Abkhazia’s government said that it will not consider joining Russia.

The EU and Ukraine signed the political part of an association agreement, including a clause envisioning ratification and implementation of the Rome Statute. A Jakarta Post columnistwelcomed a draft Indonesian penal code that references the importance of the Rome Statute.

Amnesty International and Human Rights Watch welcomed the creation of a UN inquiry into allegations of war crimes and crimes against humanity during Sri Lanka’s civil war. No Peace Without Justice convened a presentation of the Syria Transition Roadmap at the European Parliament, with the Syrian Center for Political & Strategic Studies’ Radwan Ziadeh participating. In a Foreign Policy op-ed, Human Rights Watch’s Lama Fakih called for the Syrian conflict to be referred to the ICC.A British inquiry into Iraqi detainee deaths stalled after victims’ families withdrew their claim, saying that there is insufficient evidence. Kosovo amended a law in order to provide benefits to wartime rape victims. Yonhap reported that the UN may seek to create a special tribunal for North Korea rather than refer it to the ICC.

This entry was posted in Uncategorized and tagged #GlobalJusticeWeekly. Bookmark the permalink.