Last month, we launched our Arts Initiative with a viewing of The Enclave, an installation on the DRC conflict by Irish artist Richard Mosse. The work is an example of how art can make a strong connection with the issues being tackled by the ICC. Courtesy the artist and Jack Shainman Gallery.

Art can be a powerful agent of change.

That’s why we have asked visual artist Bradley McCallum to harness the arts community to enrich the global dialogue on international justice as part of our new Arts Initiative.

The Coalition Arts Initiative consists of an artist-in-residence program that supports artists and the creation of innovative multi-disciplinary work.

As our first artist-in-residence, McCallum will help define and direct the long-term mission of the Initiative, and is working on project entitled “Weights and Measures: A Portrait of the International Criminal Court.”

McCallum intends to produce a multifaceted collective portrait—comprised of photographs, documentary film and painting—ICC cases as well as those working to end impunity.

Using art to raise awareness
The success of the ICC and the broader international justice system depends on widespread understanding of its role and work, as well as being perceived as a fair, effective and independent institution.

The power of art to communicate in ways that move, inspire and sometimes challenge is an important way to connect individuals.

Given the difficulties and complexities connected to the commission of war crimes, crimes against humanity and genocide, we believe this initiative can be an important new dimension to our awareness-raising mandate.

We envision the Arts Initiative as a program to draw in artists working in a variety of mediums to bring their specific talents and strengths to bear on issues of concern to civil society.

In the year ahead we will invite artists to help us frame conversations around questions such as the independence and effectiveness of the Court, the visibility of victims of war crimes and genocide, and notions of justice.

We recognize the significant role artists can play in initiating dialogue within our communities and we hope to use the creative arena as a global platform, providing a model and a resource for our members and other organizations similarly dedicated to advancing peace and justice. 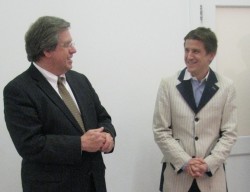 Coalition Convenor William Pace and Bradley McCallum at the launch of the Coalition Arts Initiative at the Jack Shainman Gallery on 19 March 2014. © CICC.

About Bradley McCallum
McCallum is a Brooklyn-based visual artist with a longstanding collaboration with Jacqueline Tarry—as McCallum & Tarry.

He is known for creating installations and public art that address the complex issues of individual responsibility and social justice.

He has exhibited nationally and internationally at venues such as the Burchfield Penny Center (Buffalo), the Contemporary Museum (Baltimore), Tokyo Wondersite (Tokyo), and Zidoun Gallery (Luxembourg).

About The Enclave
This March, we launched the Initiative with a special viewing of The Enclave, an installation on the conflict in the Democratic Republic of Congo (DRC) by Irish artist Richard Mosse.

Through photography, video and sound, The Enclave is a haunting elegy on a vividly beautiful land touched by unspeakable tragedy. The installation is a riveting and poetic multimedia installation that captures the landscape of conflict in the DRC, and was shot with discontinued infra-red film developed by the US army for camouflage detection.

Through his work, Mosse offers a radical rethinking of how to depict a conflict as complex and intractable as that of the ongoing war.

The Enclave is a major multi-media installation which represented Ireland at the 55th International Art Exhibition – La Biennale di Venezia.

Have your say – How can art help raise awareness of international justice and the role of the ICC?

This entry was posted in Africa and tagged Bradley McCallum, Raising Awareness, Richard Mosse, The Coalition Arts Initiative, The Enclave. Bookmark the permalink.