Following the Arab Spring, Yemen indicated it will join the ICC. A new constitution is needed first. © United to End Genocide

Yemen recently indicated its willingness to ratify the ICC Rome Statute. But after some turbulent years, it will first need to adopt a new constitution.

At a session earlier this year of the Universal Periodic Review (UPR) at the UN Human Rights Council, the Yemeni government accepted recommendations to ratify several international treaties—among them the Rome Statute.

Attempts to ratify blocked by parliament
Yemen has attempted to join the ICC before.

In 2000, during the 30-year rule of former president Ali Abdullah Saleh, Yemen signed the Rome Statute. In 2007 two thirds of parliament voted in favor of ratifying the treaty.

However, that vote was quickly overturned by parliamentarians. The reason for this is the subject of much speculation.

Some members of parliament argued that not enough representatives had been present for the original vote, and some claim that the Rome Statute is contrary to Shariah law.

Others speculate that it was due to concerns that officials would risk prosecution related to the civil war in northern Yemen.

Parliament was supposed to re-vote on ratification, but it was repeatedly delayed and never took place. 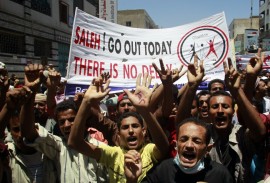 Revolution creates new obstacles
Following the events of Yemen’s Arab Spring revolution in 2011-12, the country is in the process of drafting a new constitution.

Once adopted, fresh elections can be held and a new parliament can again vote on ratifying the Rome Statute.

However, the drafting process has been beset by complications and delays.

The National Dialogue Conference (NDC)—a committee created to facilitate dialogue between different factions of society and charged with drafting the new constitution—has had to deal with decades of unattended, complex issues, such as political and economic representation in southern Yemen and Saada.

It has since agreed on basic, core issues such as the nature of political system and the criteria for the distribution of wealth and power.

But the committee failed to meet its deadlines.

Elections scheduled for February 2014 were postponed. A new deadline for drafting the constitution has been set for January 2015.

The drafting process will be taken on by a new committee that will use the recommendations of the NDC to create the new constitution.

Civil society keeps focus on justice, human rights
As Yemen continues the difficult work of drafting a new constitution, civil society is playing a strong role to ensure that the parameters of the new state are framed by respect for international law and human rights.

In the report of the UPR Working Group, the Yemeni delegation emphasized the important role played by civil society groups and human rights bodies in ensuring the enactment of laws including the ratification of the Rome Statute.

The emerging system of governance in Yemen has so far offered encouraging signs.

There has been constructive engagement with the international community and internal challenges are being dealt with through inclusive dialogue.

Yemen’s acceptance of the UPR recommendations, especially those concerning the Rome Statute, is yet another positive sign of the country’s growth towards a stable state based on the rule of law.

As that growth continues, the Coalition will continue to work to ensure that Yemen joins the ranks of nations committed to ending impunity for the world’s worst crimes.

Sign up for our email updates to stay abreast of progress in our Campaign for Global Justice.