Efrain Rios Montt was found guilty of genocide, but the conviction was overturned and a re-trial ordered. © Saul Martinez/EPA

While Rios Montt was found guilty, the country’s constitutional court shortly afterwards annulled the conviction and ordered a partial re-trial—which many believe will never happen.

A remarkable trial
The Rios Montt trial took place from March until May last year. The trial focuses on crimes committed against Guatemala’s indigenous Ixil Maya population between 1981 and 1983—the worst years of a long lasting campaign of abuse against the rural community.

Featuring over 100 eye witnesses and more than 30 expert witnesses, Roht-Arriaza explained that the trial was remarkable for several reasons:

Years of groundwork
The genesis of the trial was in 2000, when civil parties brought a case forward against Rios Montt, but which the prosecution decided to drop. A few years later, the civil parties obtained copies of military documents, including some which had been presented in a separate genocide case against Rios Montt in Spain.

In 2010, a new prosecutor with a strong background in human rights, Claudia Paz y Paz, came into office. In 2012, Rios Montt lost his parliamentary immunity. Paz y Paz decided to prosecute as a 1996 Guatemalan amnesty law had made an exception for crimes against humanity and genocide.

Charges of genocide to reflect victims suffering
The prosecution chose to focus on genocide charges (rather than limiting the prosecution to crimes against humanity) for technical reasons, including the possibility of pre-trial detention. Genocide is also included in the Guatemalan penal code since 1973, so there was no problem of retroactivity or lack of definition of the crime.

But they also knew they would likely have only one chance at trying Rios Montt, and wanted to show as broad a range of crimes as possible, including forced displacement or non killing harm.

But above all, the Ixil Mayas wanted the questions of discrimination and racism to be reflected in the debates. 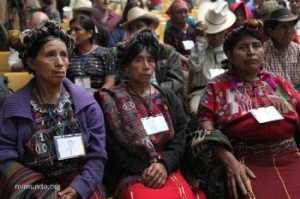 Ixil Mayas targeted for extermination
Paz y Paz chose to focus on the Ixil Mayas because they fit the nature of an ethnic group, whereas the Maya population as a whole was too broad a category of targets. Ixil people were also always considered as troublemakers and often the targets of racism.

Guatemala’s truth commission, created in 1994, identified four main areas where “acts of genocide” took place. However, the Ixil region was clearly targeted in very detailed military plans. There was strong evidence showing that the Ixil community was specifically targeted.

Trial as prevention
As the truth commission never held public hearings, the Rios Montt trial was the first time the stories of the victims were heard on a large scale, with hearings broadcast on TV and radio.

Roht-Arriaza explained that one longer term objective of this trial was to prevent potential military abuses in the future.

The majority of mass human rights violations in Latin America were perpetrated by repressive governments in the 1970s and 80s. In most cases, these authoritarian regimes disappeared following negotiated transitions and amnesty laws, which were almost all abandoned after a few years.

In Argentina, Peru and (initially) Uruguay amnesty laws were annulled on the basis that they should never have been adopted, said Roht-Arriaza. In other countries, amnesty laws still exist but are limited by states’ international obligations to prosecute international crimes or uphold fundamental rights (Chile, El Salvador).

Other countries used the “forced disappearance focus” to overcome amnesty laws. With the disappeared remaining so, as they are considered continuous crimes and it is therefore impossible to determine when to apply amnesty.

About 2,000 cases In Argentina and 1000 in Chile have come before the Courts or are currently being heard.

In Argentina, the chosen approach is to prosecute all perpetrators, not only the most responsible. This has led to “mega trials,” the biggest of which included more than 80 defendants, over 700 witnesses, and is expected to last around two years.

On the contrary in Colombia, the priority is to prosecute only those most responsible.

Supporters of Efrain Rios Montt gather during his trial. © mimundo.org

Setbacks for justice in Guatemala and Latin America
Roht-Arriaza outlined the ferocious backlash in Guatemala following the Rios Montt trial.

Ten days after the verdict, the conviction was annulled by the constitutional court., which ordered a partial re-retrial. Rios Montt’s counsel had left the courtroom during the first portion of the trial, and the judges had asked his co-accused’s counsel to represent him temporarily.  This was one of the grounds on which the Constitutional Court, by a 3-2 vote, annulled the verdict.  There were others, based on the defense strategy to create procedural knots and grounds for collateral attacks on the trial.

The trial has been reset for 2015 but, according to Roht-Arriaza, nobody really believes that it is actually going to happen. It is expected that the proceedings will be indefinitely postponed by a series of motions. Rios Montt is aged 87.

The annulment is under consideration as a denial of justice by the Inter-American Commission of Human Rights. Trial judges and the prosecutor have received numerous threats, and recently the presiding judge in the case Yassmín Barrios was suspended for a year by the Guatemalan Bar Association.

Roht-Arriaza argued that there is almost an emerging trend in Latin America of trial and conviction followed by an absence of sentence or a reduced sentence, or comfortable conditions of detention, meaning spending a reduced sentence in a “four star” jail.

As examples, she pointed to Chile and Colombia.  There are also limited prosecutions, for example in  Peru, where former President Fujimori was tried and convicted but there was no will to prosecute anybody else.

Recognition of victims can never be taken away

In the end, Roht-Arriaza argued that despite these setbacks, the Rios Montt trial was still worth the effort, particularly for the Ixil communities who were recognized as victims and now have the written judgment to prove it.

Have your say – what do you think should happen with Rios Montt?

This entry was posted in Uncategorized and tagged Efrain Rios Montt, genocide, Guatemala. Bookmark the permalink.