What next after the Global Summit to End Sexual Violence in Conflict? 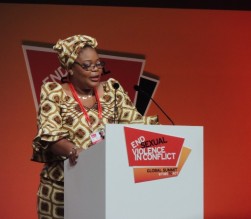 In London last week, the Global Summit to End Sexual Violence in Conflict brought the scourge of wartime rape into the public eye in way not seen before. While considered a success by most, the burning question now is: what next?

United Kingdom and Angelina Jolie join fight against wartime rape
Part of a major UK-led initiative to prevent sexual violence in conflict, the Summit brought together an impressive array of victims and survivors, 129 governments, 79 ministers, over 1,700 experts, faith leaders, youth organizations and representatives of civil society and international tribunals and organizations, as well as Nobel laureates.

Co-hosted by UK Foreign Secretary William Hague and Special Envoy of the UN High Commissioner for Refugees Angelina Jolie, with huge national and international media interest (in great part thanks to the presence of one co-host in particular), the summit set itself a number of ambitious aims: shatter the culture of impunity, take practical steps, support survivors and change attitudes.

At the Summit, there was a genuine sense of occasion and a sense that the issue was finally getting the attention it deserved, with delegates in agreement that the time has come for the international community to finally address the scourge of wartime sexual violence. 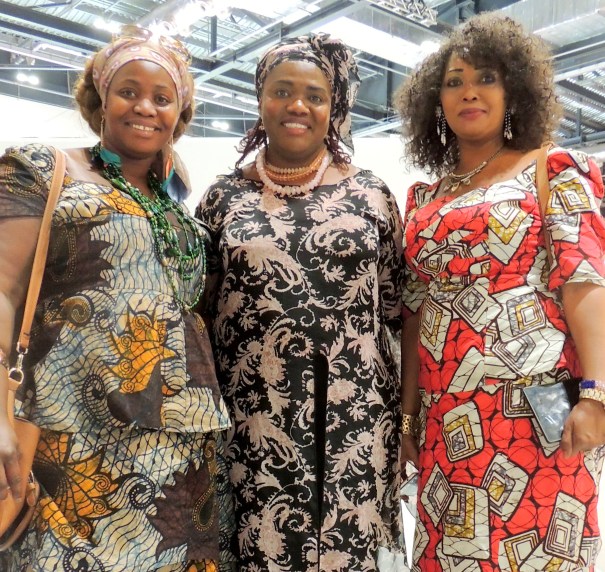 Imanbay Kadie Kamara (right) with colleagues from Sierra Leone at the Fringe at the Global Summit to End Sexual Violence, June 2014. © CICC

“I work on gender, children and disability issues in Sierra Leone, and on ending female genital mutilation worldwide. I was very impressed with the summit. The highlight was the inspirational speech by Angelina Jolie—it really changed my perceptions and motivated me to do more to raise awareness around sexual and gender based crimes. I hope others will now follow build on what has happened here this week and make this campaign much more known in Africa.”

The main question now is, will the hard work done before and during the summit—along with the good intentions and pledges—lead to less women, men, girls and boys being raped during war?

Ending impunity for sexual and gender based crimes
The summit was impressive by its scale alone. Taking place at the cavernous Excel Centre in London’s Docklands, a vast number of expert meetings were followed by ministerial dialogues and plenary sessions.

A mock trial at the Global Summit. © CICC

Many members of the public gathered with the delegates, many of whom came in colorful national dress.

There was a strong emphasis on ending impunity for sexual and gender based crimes through local, national and international accountability mechanisms, including through the ICC.

An International Protocol on Documenting and Investigating Violence in Conflict was launched, setting out international standards on how to collect the strongest possible information and evidence while protecting witnesses, in order to increase convictions and deter future perpetrators.

The ICC’s prosecutor, Fatou Bensouda, made use of the summit to publicize her office’s newly launched Policy Paper on Sexual and Gender-Based Crimes, the first ever produced by an international court or tribunal.

ICC prosecutor: my office is committed to ensure a gender perspective to all investigations, and a victims responsive approach #TimeToAct

Civil society at heart of summit
Several Coalition members participated at the summit as delegates to share their expertise. Some took the lead in panel discussions on the Expert’s Day and in the Fringe.

Assembly of States Parties to the Rome Statute President Tiina Intelmann and Trust Fund for Victims Director Pieter de Baan were also in attendance. The UK announced a £1 million contribution to the Trust Fund.

Experts and ministers discuss way forward
The first official day of the summit, Wednesday, 11 June, was dedicated to experts from governments, civil society, UN agencies, international tribunals and others.

In the opening plenary session, Baroness Warsi, Zainab Hawa Bangura, Emma Hopkins, Hillary Clinton and others stressed the need for the summit to produce tangible outcomes. Their statements can be watched on the UK FCO’s YouTube page.

An exhibit at the Global Summit featuring calls to action to end sexual violence in conflict. © CICC

With the Summit’s five cross-cutting issues (addressing social norms, women, peace and security, children affected by armed conflict, sexual violence against women and boys, protection/child protection) in mind, delegates then attended various parallel sessions looking at the range of issues and means of dealing with sexual violence in conflict.

“The Summit was a very important opportunity for those of us working in conflict areas to have access to and hear from political leaders and policy makers. We rarely have this sort of chance to speak directly to these global decision-makers and we hope that they will do more to end sexual violence in conflict.”

The following day was the Ministerial Day, which allowed ministers to hear directly about the nature and impact of sexual violence in conflict and to draw on the recommendations from the experts.

It also provided an opportunity for ministers to discuss their national perspective and challenges, as well as outline their own implementation of the Declaration of Commitment to End Sexual Violence in Conflict and make new commitments.

Subsequent ministerial dialogues focused on issues such as enhancing military and peacekeeping capabilities and improving international and national efforts to address accountability.

Nobel laureate Denis Mukwege, the medical director of Panzi Hospital in the DRC’s South Kivu received a standing ovation during his address.

Bensouda stressed the commitment of her office to ensure a gender perspective to its investigations.

US Secretary of State John Kerry then delivered the keynote address, in which he announced several new US initiatives to combat sexual violence in conflict.

.@JohnKerry "we cannot tolerate amnesties for rape in peace agreements… We will make sure women have a seat at the peace table" #TimeToAct

So what next?
The chair’s summary of the Summit details how the political commitments shown at the Summit should be turned into political action.

Civil society is calling on governments to ensure this happens.

“In a year, will we have seen more prosecutions for sexual violence in conflict? Will survivors be consulted on their needs? Will every soldier in national armies be trained on gender and sexual violence issues? Will survivors who come forward receive the necessary medical and psycho social support? Will countries have brought women to the table in peace talks? Civil society will be watching and waiting, and calling states to account for the promises made at the London summit.”

We will continue our efforts to ensure the eradication of sexual violence in conflict remains at the top of the international agenda.

Have your say – do you think the Global Summit will have a lasting effect on ending sexual violence in conflict?

Sign up for our email updates to stay up to date with all the latest news and views.

This entry was posted in Uncategorized and tagged sgbv. Bookmark the permalink.

7 Responses to What next after the Global Summit to End Sexual Violence in Conflict?