A step towards impunity for grave crimes: AU approves immunity for those in power 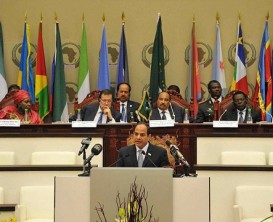 African leaders at the 23rd AU summit voted to give themselves immunity from prosecution for serious crimes. © Reuters

With its latest step towards a regional court capable of prosecuting those suspected of atrocities, the African Union (AU) could have made clear its commitment to ending impunity. Instead, the free pass it proposes for those in positions of power makes a mockery of the ideal of no immunity enshrined in the Rome Statute.

Expansion of African Court gets green light at summit
Leaders attending the 23rd African Union (AU) meeting in Malabo, Equatorial Guinea, this week approved an expansion of the jurisdiction of the African Court on Human and People’s Rights to include worthy subjects such as trafficking in persons and drugs, terrorism, piracy, and unconstitutional changes of government and corruption—along with war crimes, crimes against humanity and genocide.

However, the measure stipulates that sitting heads of state or government, as well as senior government officials, would be immune from prosecution.

Amnesty International called the adoption of the draft protocol a backward step in the fight against impunity and a betrayal of victims of serious violations of human rights.

“At a time when the African continent is struggling to ensure that there is accountability for serious human rights violations and abuses, it is impossible to justify this decision which undermines the integrity of the African Court of Justice and Human Rights, even before it becomes operational. We are deeply disappointed that African heads of state and government have failed to provide the leadership needed to ensure justice for victims of crimes under international law, opting instead to shield themselves and future generations and leaders from prosecution for serious abuses.”

No immunity at heart of international criminal legal system
It is not clear that the protocol on the expansion will reach the required 15 ratifications by AU member states. Yet, the very idea of granting immunity to those in power for the most serious of crimes is antithetical to the fight against impunity.

No immunity for graves crimes, no matter the position of the accused, is a bedrock principle of the ICC Rome Statute—to which 34 AU members are fully signed up.

The protocol also does not incorporate the general principles of law codified in Nuremberg following the Second World War, or in the ad-hoc tribunals of recent years, including the principle of irrelevance of official capacity.

If the new jurisdiction does come into effect, it will have no effect on the ICC’s ability to try heads of state. The African Court might not be able to prosecute a sitting president, but if he or she is the president of state party to the Rome Statute, the ICC certainly can.

The protocol would also contradict many national legal systems that do not allow immunities for grave crimes—including many ICC member states that have domesticated the Rome Statute, including Kenya which has been at the forefront of pushing for immunities at the AU and in the Assembly of States Parties (the ICC’s governing body).

In May, we joined 40 other civil society organizations expressing concern about the provision and calling on African attorney generals and justice ministers to reject it.

“This amendment, if adopted, would be the supreme mockery of justice. It seriously calls into question the African Union’s commitment to ensuring justice for victims of serious crimes under international law. This is a law to shield the strong and the powerful; it does nothing to protect the victims of horrendous crimes in Africa.”

Responsibility of African ICC members to take a stand for accountability
The AU should be working to promote accountability and prevent mass atrocities on the African continent. But by giving a free pass to government leaders, they make it more likely that neither will be accomplished.

The litany of atrocities seen in many African states was a driving force behind the establishment of the ICC in the first place.

Reportedly, only #Botswana objected to head of state immunity amendment to Statute of #AU Court of Justice and Human Rights – @mpbroache

So when deciding whether or not to ratify the draft protocol, those AU member states that are also members of the ICC should bear in mind the commitment they made to their citizens when ratifying the Rome Statute.

It’s time for them to take stand for accountability by underlining just how crucial the principle of no immunity is to the fight against impunity.

What do you think – should heads of state and senior government officials be given immunity from prosecution for grave crimes?

This entry was posted in Africa and tagged African Union, immunity. Bookmark the permalink.

4 Responses to A step towards impunity for grave crimes: AU approves immunity for those in power