Amielle Del Rosario, Asia-Pacific coordinator for the Coalition for the ICC, shows her support for International Justice Day. © CICC

In commemoration of International Justice Day (IJD) last week, civil society and governments held a plethora of events and issued statements in support of the fight against impunity for war crimes, crimes against humanity and genocide.

We called on both governments and civil society groups to reaffirm their support for peace through the pursuit of justice. We also held a live video conference to discuss the UN Security Council’s relationship with the ICC and its record on justice and accountability issues.

In addition to our event, other activities in celebration of IJD were held by civil society and governments around the world.

No Peace Without Justice issued a statement commemorating IJD and calling for stronger support for the ICC.

The International Center for Transitional Justice (ICTJ) commemorated IJD by reviewing five instances in history where perpetrators were brought to justice by national judicial systems.

On 17 July, the Global Institute for the Prevention of Aggression and the Permanent Mission of Liechtenstein to the UN held an interactive panel event at the UN in New York, entitled, “Into the homestretch: towards the activation of the Kampala Amendments on the crime of aggression.” Panelists included ICC President Judge Sang-Hyun Song; Ambassador Andrej Logar, permanent representative of the Republic of Slovenia to the UN; Ambassador Christian Wenaweser, permanent representative of the Principality of Liechtenstein to the UN; and Professor Beth van Schaack, Santa Clara University School of Law. The panel was moderated by David Tolbert, executive director of ICTJ.

ICC President Sang-Hyun Song released a statement calling for universal ratification of the Rome Statute and celebrating IJD as a time for uniting in support of justice.

Courtys, the contractor for the new ICC premises in The Hague, as well as other partners donated € 75,000 to the Trust Fund for Victims.

Africa
The Benin Coalition for the ICC held a conference on sexual and gender-based violence in the DRC, entitled, “Justice: A Matter for All.” The conference was hosted by Commissioner Reine Alapini-Gansou, former chairperson of the African Commission on Human and Peoples’ Rights, special rapporteur in charge of human rights defenders and Beninese candidate for ICC judge.

On #IJD, @BashirWatch calls for the end of impunity for Bashir #JusticeMatters #July17 http://t.co/OayvhArUIO pic.twitter.com/QprU1ez8sd

Afrique Justice hosted a workshop in Yaoundé, Cameroon to raise awareness of atrocity crimes and the Rome Statute system and called on Cameroon to join the ICC.

In the run-up to IJD, the Ivorian Coalition for the ICC organized its sixth quarterly conference, entitled, “Torture around the world: the case of Côte d’Ivoire.” The conference was organized as part of the program, “Fight against impunity and human rights education through the promotion of the Rome Statute of the ICC,” co-organized with OSIWA. Conference participants called on the Ivorian authorities to revise the penal code in order to define and criminalize torture, prosecute the perpetrators of acts of torture and offer redress to victims. 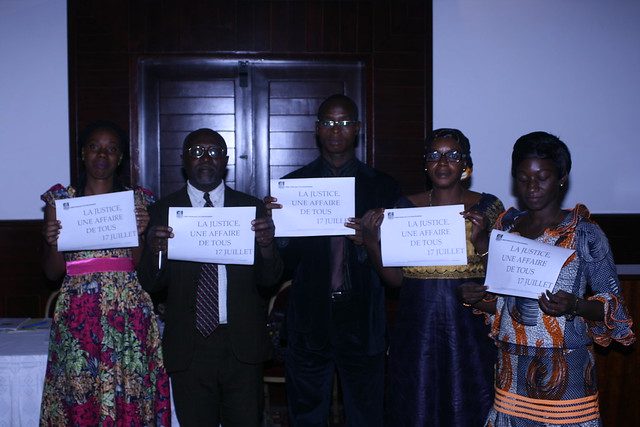 See more photos from the event on our Flickr album.

On 17-18 July, the Parliamentarians for Global Action (PGA) held a high-level meeting and peers-review of the PGA Complementarity Project in Uganda and the Democratic Republic of Congo in Kampala, entitled, “Building political will and capacity to Fight Impunity for the International Crimes within the Rome Statute of the ICC System.” PGA also issued a statement commemorating IJD.

Americas
The Salvadoran Coalition for the ICC issued a statement calling on El Salvador to ratify the ICC Rome Statute.

The Mexican Coalition for the ICC launched a new website featuring information on Mexico and the ICC.

The American Bar Association (ABA) Center for Human Rights issued a statement commemorating IJD, and launched a new website for its ICC Project on 17 July. In a Huffington Post op-ed, the ABA’s Kip Hale called for individuals to make their voices heard in support of international justice.

Asia
Odhikar issued a statement commemorating IJD and noting their contribution towards Bangladesh’s ratification of the Rome Statute.

Destination Justice hosted the multimedia Justice Matters exhibit in Phnom Penh, Cambodia. The exhibit “uses intimate portraits and videos to explore how justice is crucial to survivors of the world’s most heinous crimes, and how it matters to the world as we strive together to achieve lasting peace. It also illustrates the daily matters of justice, inside the ICC Courtroom and behind the scenes, to show exactly what it takes to make justice happen.”

The Chinese Initiative for International Criminal Justice (CIICJ), with support from the Coalition for the ICC, organized a workshop for the media and a preview launch of the Justice Matters exhibition in Beijing, China.

The Malaysian Coalition for the ICC issued a statement commemorating IJD.

The Philippine Coalition for the #ICC showing that #JusticeMatters to them. pic.twitter.com/vjFMJkIjAL

The Philippine Coalition for the ICC (PCICC) marked IJD with a visit to detainees in Bicutan, Taguig on 16 July. There are 278 detainees in Bicutan who have been waiting to appear in court since they were arrested in connection with the 20-day Zamboanga City Siege in September 2013. Balay Rehabilitation, a PCICC member organization, arranged the visit.

Europe
The European Union issued a statement celebrating IJD and paying tribute to the efforts of the ICC.

#JusticeMatters for more than 40 NGOs of the @HRDN_EU on #17July & every day pic.twitter.com/66U0fW6rc3 #ICC @_CICC @IntlCrimCourt

The members of the Green Party in the European Parliament issued a statement celebrating IJD and calling on European governments to do more to fight impunity.

Cyprus issued a statement commemorating IJD and explaining why Cyprus supports the ICC.

France issued a statement commemorating IJD and its commitment to international criminal justice.

Italy issued a statement commemorating IJD. In New York, the Italian mission to the UN hosted a panel entitled, “The United Nations and the International Criminal Court: Partners of Shared Values.” The Assembly of States Parties President Tiina Intelmann and ICC President Judge Sang-Hyun Song participated in the panel discussion.

Poland issued a statement celebrating IJD and reaffirming its commitment to the ICC.

On 21 July, the Ministry of Foreign Affairs of Romania, in collaboration with the Romanian Red Cross and the National Commission on International Humanitarian Law, held a forum focusing on the full implementation of the Rome Statute and the ratification of the Kampala Amendments. ICC Prosecutor Fatou Bensouda was the keynote speaker.

#Austria just became the 15th State to ratify the #KampalaAmendments on the #CrimeofAggression. Great way to celebrate #17July

The Human Rights Agenda issued a statement in honor of IJD calling on Turkey to join the ICC.

The Turkish Coalition for the ICC released a statement celebrating IJD.

The United Kingdom released a statement commemorating IJD and affirming its support for the ICC.

Middle East & North Africa
On 21 July, Justice Without Frontiers (JWF), in collaboration with the Beirut Bar Association, organized a conference on sexual and gender-based crimes. Speakers included Brigitte Chelebian, founder/director of JWF; Colonel Elie Asmar, head of the Lebanese Internal Security Forces department dealing with sex crimes; and Rabiaa El Garani, a sexual and gender-based violence specialist for the  Office of the High Commissioner for Human Rights’ International Commission of Inquiry on the Syrian Arab Republic.

Radwan Ziadeh, president of the Syrian Commission for Transitional Justice, called for justice in Syria.

This entry was posted in Uncategorized and tagged International Justice Day. Bookmark the permalink.