ICC member states to meet for annual session – what’s on the agenda? 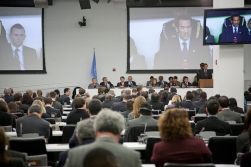 The president of Botswana opens the ASP in New York on in December 2011. © CICC/Solal Gaillard.

Next week, civil society from across the world will join ICC member states and other stakeholders in New York for the annual session of the Court’s governing body—the Assembly of States Parties (ASP).

As the ICC’s management, oversight and legislative body, the 122 states parties that currently make up the Assembly will discuss and make decisions on a number of issues central to the Court’s operations at UN headquarters from 8-17 December.

So what’s on the agenda?

First up on the agenda is the election of a new ASP president, six new ICC judges and other officials. Senegal’s justice minister Sidiki Kaba, a longtime supporter of the ICC, has been endorsed for the position of ASP president and will take office for a three year term. He will succeed Estonia’s Tiina Intelmann. States will then elect candidates to fill six spots on the judge’s bench from a pool of 17 nominees. Two vice-presidents of the Assembly, 18 new members of the ASP Bureau, and seven members of the Committee on Budget and Finance are also to be elected.

The Assembly will consider and adopt the Court’s budget for 2015. It will also discuss the year-round work the Assembly has been doing on issues such as enhancing the cooperation between states and the Court, complementarity efforts, the implementation of the rights of victims and affected communities, amendment request to the Court’s Rules of Procedure and Evidence, among others. Most of these discussions will culminate in the adoption of resolutions.

Over the course of a day and a half, during a general debate, states parties, non‐states parties, and regional and international organizations will address topical issues related to the Assembly’s work and the Rome Statute system, as well as their own contributions. NGOs will also address the Assembly.

States will hold a dedicated debate on improving cooperation with the Court and its decisions. As the Court doesn’t have its own police force, it is difficult to fulfill its mandate effectively without securing partnerships for cooperation with states, regional organizations, the UN and others. Cooperation in the area of sexual and gender based crimes will be a special focus at this Assembly, with the ICC prosecutor set to launch her Office’s policy on the investigation and prosecution of such crimes.

The government of Kenya has requested the inclusion of a supplementary agenda item to the Assembly’s agenda “to discuss the Conduct of the Court and the Office of the Prosecutor” in relation to the situation in Kenya.

The east African country’s president and vice president are both facing trial at the ICC for allegedly orchestrating post-election violence in Kenya in 2007-08.

In a letter to the ASP president, the ICC “principals” (president, prosecutor, and registrar) responded by claiming many of the issues raised should, as a matter of principal and procedure, be addressed before the relevant Chamber rather than the Assembly.

It remains undecided whether the Assembly will discuss this matter.

The ASP is a pivotal event for the Coalition, with NGOs contributing to discussions through side events, advocacy meetings and press conferences. On the sidelines of the Assembly, civil society will meet with African, Asian, European and Latin American governments to discuss means of advancing the Rome Statute system of justice throughout the world.

Throughout the year, NGO experts monitor the work of the ICC and ASP through our Issue Teams. Over the coming days, we will be featuring our key advocacy right here on #GlobalJustice on issues pertaining to ASP oversight, the Court’s budget, cooperation, the Court’s communications efforts, the elections of new judges and other officials, gender justice and the Trust Fund for Victims.

We have also produced background paper to give context to the issues to be discussed at the Assembly.

Individual Coalition member recommendations to the ASP are also available on our ASP 13 webpage. Official ASP documents, including reports from the ASP’s facilitators on year round work on various issues, and the ASP session’s agenda can be found on the ICC-ASP website.

Through the Assembly, we will be publishing short daily summaries of developments with related documents and news coverage through our email service. Sign up now.

If you are already a subscriber, please make sure that you have opted-in to this category of email in your subscription preferences.

Have your say – How do you think states meeting next can best demonstrate their support for the ICC system and victims of grave crimes?