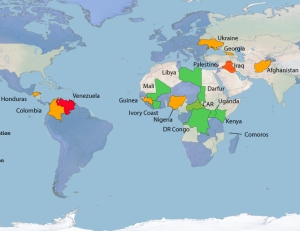 Preliminary examinations (PEs) are carried out by the ICC prosecutor to determine whether to open a full investigation. They are also designed to deter possible violence and spur national prosecutions of grave crimes. Civil society is now calling on the Court to increase communications activities around PEs to maximize their impact.

Great demand for information in PEs

The OTP has made public that it is currently examining at least nine situations on four continents, including Afghanistan, Colombia, Georgia, Guinea, Honduras, Iraq, Nigeria, and Ukraine. This year saw the conclusion of the PE in the Republic of Korea and with respect to the Comoros Referral, while the Central African Republic II moved to a full investigation following a PE into recent violence in the country.

The OTP has been working to improve its communication activities around PEs—including the publication of annual status reports, interim and final situation specific reports; video messages, and statements.

These efforts are crucial to ensuring the transparency of the Office’s analysis and efforts to ensure justice for victims and affected communities, particularly those seeking to engage with the Court. They are also essential to OTP strategic goals such as catalyzing positive complementarity (national prosecutions of international crimes), cooperation and deterrence.

Yet civil society has identified this as an area that could be further strengthened to achieve maximum impact. Many non-governmental organizations in countries under preliminary examination report a great need for information among a wide range of constituents (victims groups, civil society, media, academia, government and policy makers, legal communities, the general public) regarding:

This information is crucial to clarifying misconceptions and countering misinformation, which can often be widespread given the regularly low levels of knowledge of the ICC and Rome Statute in many PE countries.

In a November 2014 letter to the ICC prosecutor, the Coalition’s Team on Communications outlined the following recommendations for the OTP:

At the upcoming Assembly of States Parties (ASP), ICC member states should encourage the OTP to take steps to improve its communications strategies and activities around PEs

The Registry’s Public Information and Documentation Section (PIDS)—responsible for the dissemination delivery of basic, neutral information on the mandate and activities of the ICC—is not currently communicating directly with populations in PE countries. For strategic and resource-driven reasons it has been decided that all communications during PEs will be conducted by the OTP.

At this ASP, states should also urge the Court, including the OTP, to reconsider this approach given that outreach at the earliest possible opportunity—which for the ICC is during PEs—is a widely recognized best practice. Coordinated activities by both PIDS and the OTP at this stage is essential to addressing this critical information gap. States should call on both the OTP and PIDS to outline the resources needed to achieve this.

Importance of early and direct communication

The importance of early outreach from the outset of the Court’s involvement, including in preliminary examinations, is based on lessons-learned from ad-hoc tribunals and courts and has been recognized by ASP for several years. Early and direct communication with various audiences makes for a more effective and efficient Court.

ICC member states and other stakeholders also highlighted the importance of this work during a May 2014 roundtable discussion on ICC communications, underlining the need for a comprehensive communications strategy “which should be anticipatory or start as early as possible and should target not only situation countries but also go beyond them.”

What is the relationship between PEs and complementarity?

Under the Rome Statute, states parties have the primary responsibility to investigate and prosecute grave crimes committed on their territory or by their nationals. The ICC will only step in if national authorities are genuinely unable or unwilling to do so. PEs are therefore a vital mechanism in encouraging states to live up to their obligations under the Statute.

Visit our Team on Communications webpage for more information on how we are working to make international justice visible, and our ASP 13 webpage for more on our recommendations for states meeting next week.

Have your say: What steps can the ICC take to increase its communications in PEs?

This entry was posted in Uncategorized and tagged Communications, complementarity, Cooperation, detterence, Office of the Prosecutor, preliminary examinations, Team on Communications. Bookmark the permalink.