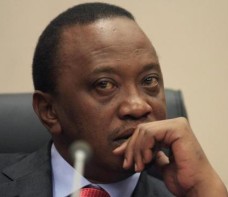 ICC Trial Chamber V(B) has rejected a prosecution request for a further adjournment of the case against Kenyan President Uhuru Kenyatta, as well as the defense’s request to terminate the proceedings. Judges directed the prosecution to file a notice within one week indicating either (i) its withdrawal of the charges in this case, or (ii) that the evidentiary basis has improved to a degree which would justify proceeding to trial.

In a separate decision, the Chamber also rejected a prosecution request for a finding of non-cooperation against the Kenyan government and referral of the matter to the Assembly of States Parties (ASP) to the ICC Rome Statute.

In its decision rejecting the Prosecution’s request for a further adjournment of the case, the Chamber noted factors including the Prosecution’s admission that the evidentiary basis remains insufficient to support a conviction and the Prosecution’s concession that it remains speculative whether the information sought in the cooperation request would, even if obtained, be sufficient to support the charges. The Chamber also noted the accused’s right to be tried without undue delay and the presumption of his innocence. The Chamber found that a further adjournment would be contrary to the interests of justice under the circumstances. The Chamber considered also the victims’ legitimate interests, which include seeing those responsible for the crimes committed being held accountable. However, the Chamber noted that these interests must be balanced with other interests of justice, and, in light of the circumstances mentioned above, found that it would not be in the interests of justice, or of the victims, for the proceedings to be further adjourned on the current basis.

Having ruled upon the adjournment request, the Chamber indicated that, unless the evidentiary base has now improved to a degree which would enable the trial to proceed, it considered the appropriate course of action to be a withdrawal of charges by the Prosecution. The Chamber additionally found that, in the event of a withdrawal of charges, its decision would not prejudice the right of the Prosecution to bring new charges against the accused at a later date, based on the same or similar factual circumstances, should it obtain sufficient evidence to support such a course of action.

Decision on Prosecution’s application for a further adjournment

Decision on the Kenyan Government’s cooperation

On 29 November 2013, the Prosecution filed an application for a finding of non-cooperation against the Kenyan Government, alleging that the Government had failed to comply with a request to produce financial and other records relating to Mr Kenyatta.

After considering the submissions of the parties and participants on this issue, the Chamber issued a decision, today, rejecting the application for referral of the matter to the Assembly of States Parties. Following a detailed assessment, the Chamber found that the approach of the Kenyan Government to the cooperation had not met the standard of good faith cooperation required from States Parties under the Rome Statute. In particular, the Chamber found that the Kenyan Government had taken no meaningful steps to compel production of the materials requested by the ICC Prosecutor. According to Trial Chamber V(B), the Kenyan Government’s non-compliance has impinged upon the Court’s ability to fulfil its functions and powers and in particular, the Chamber’s truth-seeking function.

However, in the context of the potential for a referral to contribute to a fair trial, the Chamber noted its denial of the adjournment request. The Chamber also noted, amongst other things, the Prosecution’s delay in pursuing investigations and in following up on the request for cooperation. The Chamber stressed that the issue of the Kenyan Government’s compliance with the cooperation request should have been addressed at a much earlier stage; it found that doing so would have mitigated the impact that the non-compliance has had on the proceedings in this case to a significant degree.

In conclusion, despite having expressed strong concerns regarding the approach of the Kenyan Government, the Chamber exercised its discretion in not referring the matter to the Assembly of States Parties, since the Chamber was not persuaded that a referral would facilitate a fair trial, was in the interests of justice or was otherwise appropriate in the particular circumstances.

The parties may seek the Chamber’s authorisation to appeal either of these decisions.

Mr Kenyatta is charged, as an indirect co-perpetrator, with five counts of crimes against humanity consisting of murder, deportation or forcible transfer, rape, persecution and other inhumane acts allegedly committed during the post-election violence in Kenya in 2007-2008. Charges were confirmed on 23 January 2012, and the case was committed to trial before Trial Chamber V(B).