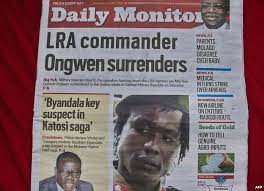 The Ugandan media reacts to the surrender of LRA commander Dominic Ongwen, wanted by the ICC for over 10 years.  © AFP

2015 has begun with a bang for the International Criminal Court (ICC). Just days after Palestine’s accession to the Rome Statute came the news that ICC fugitive Dominic Ongwen, a major general in the Lord’s Resistance Army (LRA), surrendered to Seleka rebels in the Central African Republic (CAR). With his fate still uncertain, civil society is calling for his swift transfer to The Hague.

Ongwen’s surrender is a major development for the Court. Uganda was the first situation opened by the then prosecutor Luis Moreno Ocampo ten years ago. He was among five high-ranking LRA commanders subject to the ICC’s first arrest warrants for war crimes and crimes against humanity. While two have since died, Ongwen, LRA leader Joseph Kony and another of his deputies, Okot Odhiambo, have eluded capture by operating in remote border regions of central Africa. The lack of progress in arresting the suspects has been a source of increasing frustration among victims and affected communities in Northern Uganda.

Seleka rebels in the CAR reportedly handed over Ongwen to United States military advisors, in the country to assist an African Union (AU) Regional Counter LRA Task Force. (The rebels are said to be claiming the $5 million reward offered by the US government for information leading to the capture of any of the LRA ICC suspects). It has since emerged that Ongwen is now in the custody of the Ugandan contingent of the AU force, who have apparently agreed to work with authorities in the CAR to transfer him to the ICC. However, there has been no definite sign of delivery to The Hague to date.

We commend @_AfricanUnion + govts of #CAR & #Uganda for efforts; Fully support their agreement to transfer #Ongwen to #ICC.

“Whatever state or group has custody of Dominic Ongwen should cooperate and hand him over to the ICC so that he can face trial before the ICC. The significance of handing over Ongwen to the ICC cannot be over-emphasized,” said Mohammed Ndifuna, chief executive officer of Human Rights Network- Uganda, which hosts the Ugandan Coalition for the ICC. “Firstly, it will enable this case that has stalled to begin an earnest and for the victims of the crimes allegedly committed by him and cahoots to receive justice. Secondly, it sends a signal to all and sundry, that there will be no room for impunity in respect of international crimes. Thirdly, it is a good testament that state parties to the Rome Statute and the members of the international community are supportive of the ICC and that their strength can ultimately deliver the badly needed results.’

Several other Coalition members have called for Ongwen’s swift transfer to the ICC and that the governments of CAR and Uganda, both ICC members, should demonstrate their support for justice for victims of grave crimes by immediately transferring Ongwen to the Court. Other commentators have suggested that the ICC could eventually hold Ongwen’s trial in Uganda.

There have been some calls for Ongwen be tried in Uganda by the International Crimes Division (ICD) of its High Court. Under the Rome Statute, states parties have the opportunity to challenge the admissibility of cases before the ICC if they feel that they are willing and able to investigate and prosecute domestically.

The ICD has only tried one similar case – that of former LRA leader Colonel Thomas Kwoyelo. In 2011, Kwoyelo was found guilty of found guilty of 12 counts of the war crimes of willful killing, taking hostages, extensive destruction of property and causing serious injury to civilians. However, Uganda’s Constitutional Court ruled that he should be released as he was eligible for pardon under the country’s amnesty law.

Kwoyelo remains in arbitrary detention to this day due to this legal limbo. Some fear a similar situation could come about should Ongwen be dealt with by the Ugandan legal system.

Indeed, legislators from the Acholi sub region in Northern Uganda (where Ongwen comes from) and religious leaders are advocating for him to be forgiven and amnestied. They claim that as the Ugandan government failed to protect him and he was forcibly recruited by the LRA when he was a child, he is as much a victim as perpetrator. Both Ongwen and Kwoyelo were abducted and indoctrinated by LRA as children and rose to senior ranks.

However, the amnesty law grants immunity for offences related to war or armed rebellion, but excludes the leadership of the LRA from amnesty in order to ensure that those with the greatest responsibility are brought to justice.

What are the next steps?

With the negotiations on Ongwen’s future ongoing, it is crucial that the ICC immediately re-establish outreach activities in Uganda (stopped last year due to a lack of judicial activities) to keep victims and affected communities informed of developments as they arise.

It is important to recall that before an ICC trial can take place, the prosecutor must first convince judges that there are substantial grounds to believe that the Ongwen committed the crimes with which he is charged and that there is sufficient evidence to proceed to trial.

The Office of the Prosecutor will also likely have to take time to revive its long dormant case against Ongwen, which is sure to throw up challenges, including in terms of resources. Of course, the suspect is presumed innocent and the ICC has strict provisions, including the right to a robust defence, to ensure that his fair trial rights are respected at the Court.

Have your say – what do you think should happen to Ongwen?