Beyond the Rios Montt trial, Guatemala’s search for justice continues 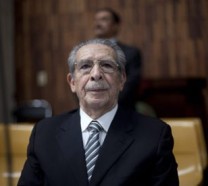 Efrain Rios Montt was found guilty of genocide, but the conviction was overturned and a re-trial ordered. © Saul Martinez/EPA

Emi MacLean, a legal officer for freedom of information and expression with the Open Society Justice Initiative, shares her thoughts on the search for justice for grave crimes committed during the Guatemala’s decades-long internal armed conflict.

Efrain Rios Montt, who headed a brutal military dictatorship in Guatemala over 30 years ago, was wheeled into court in Guatemala City last week on a hospital gurney. He was there to face a renewed trial on charges of genocide and crimes against humanity, in a resumption of the process that was overturned on a technicality in 2013, after he’d been found guilty and sentenced to 80 years in prison.

This time around, the legal maneuvering again won out: initially the defense argued their 88-year old client was too ill to attend; by the end of the day, the trial was indefinitely suspended after the defense succeeded in having the presiding judge removed.

Once again, the effort to renew the trial faced opposition from members of Guatemala’s elite with close ties to the military establishment. Once again, the outcome demonstrated the challenges inherent in attempting to prosecute mass atrocities in national courts, following a democratic transition and amid underlying political tensions.

Where does this leave Guatemala’s efforts to come to terms with the worst of the crimes committed during its decades-long internal armed conflict? Advocates of justice argue that trials are needed, not only to bring justice for the victims, such as the scores of Mayan villagers who again crowded the courtroom last week, but also to establish a shared understanding of what happened that will provide a surer basis for Guatemala’s democratic future and help prevent a recurrence of such atrocities in Guatemala and elsewhere.

So far, those court cases involving mass atrocities that have been brought to court have mostly involved lower ranking military personal. Despite the setbacks with Rios Montt, some other cases against senior officers continue:

For the past two decades, following a 1996 peace agreement with leftist groups, victims and civil society groups have sought to bring about a reckoning with egregious crimes—including disappearances and massacres, as well as torture and sexual slavery. These cases picked up steam in the last five years under the leadership of Guatemala’s former pioneering attorney general Claudia Paz y Paz. But the prosecution of Rios Montt remains the high-water mark of this effort to go after the very top—and a demonstration of the repeated obstacles to such a prosecution.

Prosecutors allege that Rios Montt was responsible for the killing of 1,771 indigenous Mayans, the displacement of 29,000, and the rape and torture of others during 15 massacres. Nearly half of all reported violations during the bloody 36-year war occurred in 1982, the year in which Rios Montt came to power. In the Ixil region, between 70 and 90 percent of the communities were wiped out around this period.

In theory, the trial could still resume. An appellate court could designate a new judge to complete the three-judge panel in the coming days. However, it took weeks for this panel to be constituted because scores of judges declined to take part in a trial that has stirred bitter political divisions. And it took many months for the court to schedule this initial hearing. Moreover, Rios Montt has challenged numerous judges already, and there are a limited number of judges tasked to decide complex cases. Taking these factors together with the delays inherent in the judicial system, and Rios Montt’s age and failing health, Rios Montt may not live long enough to face another attempt to bring him before a court.

At the same time, an appellate court also still needs to decide on a bid by Rios Montt’s defence team to invoke a 1986 amnesty decree (passed by the then military government) to prevent his prosecution– despite its cancellation by Congress in 1996, and subsequent judicial rulings.

Victims still stand by the trial court’s 2013 conviction for genocide and crimes against humanity, and are seeking vindication from the Inter-American Commission on Human Rights. But the case remains open and unresolved.

The hurdles show how slow a national transition can be, the complexities of coming to terms with horrific crimes of the past, and the powerful influences outside of the courtroom. But the victims who again crowded the court last week in the hope of seeing justice done—decades later, and a second time over—demonstrate the significance of the continued efforts.

This article first appeared on the website of the Open Society Justice Initiative.

To follow the Open Society Justice Initiative’s regular monitoring of the Rios Montt and other Guatemalan trials for grave crimes, see ijmonitor.org.