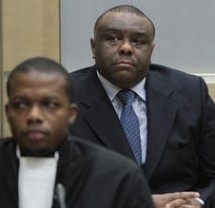 Jean-Pierre Bemba in an ICC courtroom in 2010. © REUTERS/Peter Dejong

In this guest post, Wairagala Wakabi describes the latest developments in case against Jean Pierre Bemba and four others accused of witness tampering in his war crimes trial.

A second trial for Jean Pierre Bemba at the International Criminal Court (ICC) is now imminent after the court’s Presidency named judges to try the Congolese opposition leader and his four associates. Trial Chamber VII was constituted after a pre-trial judge rejected their bid to appeal the confirmation of charges decision.

Judge Chile Eboe-Osuji will preside over the trial of the five individuals accused of corruptly influencing witnesses that testified in Mr. Bemba’s trial for war crimes and crimes against humanity at the ICC. The other judges that make up the chamber are Olga Herrera Carbuccia and Robert Fremr.

The charges, which fall under Article 70 of the Rome Statute, were laid against the five individuals in November 2013. They followed more than a year of investigations in which email and telephone communications by Mr. Bemba and the two indicted lawyers were intercepted. Information gathered through these intercepted communications forms an integral part of the prosecution case.

In the confirmation of charges decision, judges found evidence showing that Mr. Bemba’s lawyers regularly contacted witnesses before and during their court appearances and “directed” them on the content of their testimonies. The evidence also showed that Mr. Bemba’s associates transferred varying amounts of money to witnesses and in some cases provided some of them with mobile phone handsets.

The pre-trial chamber also found that while by virtue of his detention Mr. Bemba did not directly pay or coach the witnesses, “he was at the origin of many of the acts committed by the other suspects and was systematically informed of the status of those acts and of their results.” In three instances, he reportedly spoke to three witnesses on a phone under the guise of privileged communications.

All the accused contested the confirmation of charges decision, but Cuno Tarfusser, single judge of the pre-trial chamber, on January 23, 2015 rejected their applicationsto appeal.

Judge Tarfusser noted that most of the issues listed by Mr. Bemba as having been neglected by the chamber “constitute nothing else than slight variations of arguments which had already been submitted, and decided upon, in the course of the proceedings.”

For many of the grounds for appeal raised by the other accused, the judge stated that it required more than highlighting the existence of a possible alternative interpretation of facts for an issue to be suitable to trigger the leave to lodge an interlocutory appeal.

Mr. Kilolo’s lawyers argued that his conduct, which had been characterized as corruptly influencing witnesses, was actually “non-illicit refreshing” of the witnesses’ memories by reading to them, or having them read, their prior statements. Such conduct did not comprise corruptly influencing witnesses insofar as their testimonies reflected their prior statements to the Bemba defense, they argued.

Other issues raised by the defense were the allegedly inadequate legal aid granted to Mr. Bemba and Mr. Mangenda and the refusal by the pre-trial chamber to have oral testimonies in the context of the confirmation hearing.

Following eleven months in pre-trial detention, Mr. Bemba’s co-accused were last October released from ICC custody, after Judge Tarfusser determined that their continued detention would be disproportionate to the penalties for the offences charged. If convicted, they would receive prison terms not exceeding five years, or a fine, or both.

On January 23, Judge Tarfusser ordered the provisional release of Mr. Bemba subject to judges in his main trial also allowing his conditional release. While the prosecution is appealing the pre-trial judge’s order, defense lawyers have filed anappeal against the refusal by judges in the war crimes trial to grant Mr. Bemba interim release.

This article was produced by and originally appeared on the International Justice Monitor, a project of the Open Society Justice Initiative.

This entry was posted in Bemba, Central African Republic. Bookmark the permalink.