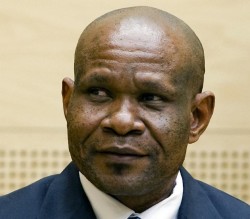 Mathieu Ngudjolo Chui during his trial in The Hague. © AFP Photo/Robin van Lonkhuijsen

While two judges dissented, the majority of the Appeals Chamber rejected the prosecutor’s request for a retrial of the case, which centered on an attack by a rebel group on a village in eastern Democratic Republic of Congo in 2003.

Ngudjolo Chui was acquitted in 2012 and released from ICC custody. He has since applied for asylum in The Netherlands.

Need to know more? 10 facts about the Ngudjolo Chui trial.

Central African Republic
Parliamentarians for Global Action announced its support for a special criminal court for the CAR. While in the country, ICC Prosecutor Fatou Bensouda made a statement on her recent investigations, underscoring the independence and impartiality of her office. The UN said that surging violence has caused tens of thousands to flee their homes, and two former leaders of the CAR previously accused of undermining the democratic transition are said to be ready to join the reconciliation process.

Justice Hub considered whether Jean Pierre Bemba had command responsibility for the crimes with which he is charged.

Kenya
The final prosecution witness in the case against Kenyan Deputy President William Ruto and broadcaster Joshua Sang will testify on 23 March. ICC judges declined William Ruto and Joshua Sang’s requests to extend the page limit of their no-case-to-answer motion.

A special team of detectives was appointed to investigate the disappearance of missing ICC witness Meshack Yebei. An anonymous member of the Yebei family alleged that the ICC defense team was involved.

Darfur
On 3 March, the Appeals Chamber will deliver its judgment on the appeal against the decision to issue an arrest warrant for Abdallah Banda Abakaer Nourain.

Sudanese President Omar Al-Bashir said that the ICC is being using to destabilize Sudan and denied that genocide had occurred in Darfur. A Darfur rebel leader urged the international community not to recognize Al-Bashir as the legitimate head of state of Sudan.

Democratic Republic of Congo
The ICC Appeals Chamber will issue its decision on appeals against the procedures and principles for reparations in the Thomas Lubanga case on 3 March 2015.

The Congolese military launched an offensive against the Democratic Forces for the Liberation of Rwanda (FDLR) rebels.

Uganda
ICC Prosecutor Fatou Bensouda arrived in Uganda for her five day visit to meet with government officials, civil society, victims and affected communities. Following a Court ruling, the ICC released documents relating to past requests made for the arrest of Dominic Ongwen. Central African Lord Resistance Army (LRA) victims want the ICC to prosecute crimes committed in the CAR as part of the Ongwen case. Meanwhile, Ongwen reportedly disclosed that he met with LRA leader Joseph Kony near Darfur, and a new report claims that the number of active LRA fighters has declined to 165.

In an openGlobalRights op-ed, Lawyers for Justice in Libya criticized the ICC’s efforts in prosecuting ongoing crimes and called for a different approach, such as holding the trials in Libya. Libyan Foreign Minister Mohammed al-Dairi said that Libya is unable to cooperate with the ICC in regards to Saif al-Islam Gaddafi because it lacks an independent, consensus government.

The International Crisis Group suggested a number of steps for the international community to take in order to strengthen negotiations and ensure a political solution in Libya. The UN urged Libyan groups to pursue the next round of talks in the UN-backed dialogue, as Libya’s elected parliament suspended its participation.

Mali
The Malian government signed a deal with six armed groups to cease hostilities as part of UN-sponsored peace talks.

Côte d’Ivoire
Former first lady Simone Gbagbo questioned the charges against her as she appeared in an Ivoirian court for the first time on charges of undermining state security.

Preliminary Examinations
HRW and the government of Colombia both condemned the FARC’s demand that rebels accused of atrocities be spared from imprisonment.

Families of the victims of the 2010 Mavi Marmara raid appealed the ICC prosecutor’s decision not to proceed with a full investigation into the incident.

AI gathered evidence of crimes allegedly committed by both the Boko Haram and Nigeria‘s military. Boko Haram militants fleeing a Nigerian army offensive killed 21 civilians, and two blasts near bus stations killed at least 27 people in northern Nigeria. The Nigerian president said that the tide has turned against the extremist group. Meanwhile, the Ekiti State chapter of the All Progressives Congress petitioned the ICC and other foreign authorities over alleged state-sponsored violence against its members before the upcoming elections.

AI’s Saleh Hijazi told Al Jazeera that there is evidence that the Israeli army may have committed war crimes in Palestine. Al-Haq published an analysis of the 2014 Gaza conflict. According to new leaks, Palestinian leader Mahmoud Abbas allegedly colluded with Israel to prevent war crimes charges by secretly opposing the UN’s Goldstone report.

The International Federation of Human Rights (FIDH) and AI told the Kyiv Post that the criminal justice system of Ukraine has failed to address the widespread abuses during the Euromaidan protests, perpetuating a culture of impunity for police officers. A coalition of 13 Ukrainian civil society organizations called on the ICC Office of the Prosecutor to open an investigation into the Euromaidan events. FIDH Vice President Tolekan Ismailova called on the Ukrainian government to expand ICC jurisdiction in order to review and establish responsibility for ongoing crimes in Crimea and Donbass. Ukrainian forces and separatist fighters both announced that they are withdrawing heavy weapons from the front line in eastern Ukraine.

Campaign for Global Justice
Euromaidan SOS and Open Dialogue of Ukraine urged the Ukrainian government to ratify the Rome Statute. The Odessa Talk blog highlighted the Coalition’s campaign for Ukraine to join the ICC.

UN High Commissioner for Human Rights Zeid Ra’ad Al Hussein called on Iraq to join the Rome Statute following the release of a UN report documenting widespread human rights violations in the country. However, the Kurdistan Regional Government’s minister of Anfal stated that Iraq is not ready to become a member of the Court.

What else is happening?
Amnesty International called the global response to mass atrocities ineffective and shameful. In a New York Times op-ed, AI Secretary General Salil Shetty called for the five permanent members of the UN Security Council to refrain from using the veto on resolutions dealing with mass atrocities.

The Coalition for the ICC recognized Argentina’s work at the UN in support of the ICC.

In a response to the International Center for Transitional Justice‘s debate on the fight against impunity, PGA’s David Donat Cattin argued that fighting against impunity for serious crimes is an imperative for the international community as a whole.

The Human Rights Committee in the Kurdistan Parliament said that it will send a report detailing alleged crimes committed by Islamic State militants to the UN and ICC. The chair of the UN commission of inquiry on human rights in North Korea said that the international community must hold North Korea accountable and refer the situation there to the ICC.

In Foreign Policy, a former US official argued that the US should make it a federal criminal offense for the ICC to prosecute US officials. ICC expert and blogger Mark Kersten criticized the proposal.