A special court for the Central African Republic? 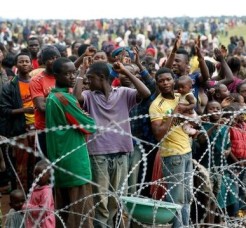 The conflict in the CAR has left thousands displaced. © AP

Civil society is backing a plan for a special criminal court to help the ICC prosecute perpetrators of ongoing abuses in the conflict-stricken Central African Republic (CAR).

The country’s transitional parliament is currently considering a bill to create a special court to complement the ICC’s efforts to bring justice to victims of mass atrocities.

The CAR has experienced rampant sectarian violence since 2012. Fighting between the mainly Muslim Seleka rebel group and the Christian anti-Balaka forces has claimed thousands of civilian lives.

The proposed court would feature a combination of 14 national and 13 international judges. While a Central African judge would preside over the court, the special prosecutor would come from abroad.

The presence of international judges and experts would provide guidance and expertise to difficult and dangerous investigations, civil society groups say. The court would also help relieve the burden on national courts during the lengthy conflict.

While civil society is supportive of the ICC in prosecuting those who bear the most responsibility for atrocity crimes in the CAR, a special criminal court would be able to hold lower-level perpetrators accountable. Justice would be served on a much larger scale.

“The proposed draft law on the Special Criminal Court constitutes a balanced and innovative initiative to support the Central African judicial system, which is ravaged by the conflict triggered in 2012 by the armed groups in the northern part of the country. The Special Criminal Court will strengthen the national judiciary’s capacity to investigate and prosecute those responsible for war crimes and crimes against humanity in efficient, independent and fair trials.”

Marcel Djimasse, chair of the Parliamentarians for Global Action National Group in CAR:

“Victims of the most serious crimes of international concern, deserve to see justice being done and the establishment of a Special Criminal Court is certainly a very important step in the right direction. The draft law as adopted on 5 February, 2015 envisages the obligation upon Central African Republic authorities to bring those allegedly responsible for such crimes to justice. This is crucial, as sustainable peace depends on the existence of strong and effective national accountability mechanisms that not only can investigate and prosecute individuals for the commission of international crimes, but that can also have a deterrent effect.  I am convinced that the Special Criminal Court would be a key tool to fight against impunity, bringing perpetrators to justice and paving the way for sustainable peace in CAR.”

In establishing a special court to prosecute atrocities domestically, the CAR could place itself at the forefront in the fight against impunity, serving as an example for other countries by seeking to hold all perpetrators of serious crimes accountable.

Have your say – is the creation of a special court the best way to fight impunity in the CAR?

This entry was posted in Africa, Central African Republic and tagged CAR, Special Criminal Court for CAR. Bookmark the permalink.

5 Responses to A special court for the Central African Republic?