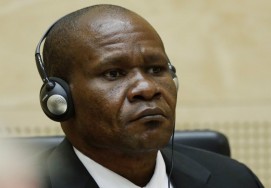 Mathieu Ngudjolo Chui was acquitted of crimes against humanity and war crimes. © AFP

The continuing controversy over the fate of Congolese militia leader Mathieu Ngujolo Chiu—fighting deportation from the Netherlands—has highlighted the urgent need for ICC member states to take in persons acquitted by the Court.

Last February, ICC appeals judges confirmed the acquittal of Ngudjolo of charges of crimes against humanity and war crimes.

He had been accused of jointly leading an attack on a village in eastern Democratic Republic of the Congo (DRC) in 2003 that left over 100 civilians dead. The appeals decision brought the case to final close before the ICC.

However, as he was leaving the courtroom, Dutch authorities took Ngudjolo into custody in order to deport him to the DRC. He was taken off the plane late that evening only after an intervention by a Dutch judge who stayed the deportation order.

Ngudjolo has since been allowed to file a second asylum application in the Netherlands. His initial application had been rejected in July 2013, and confirmed on appeal in October 2014.

His lawyers have reportedly also filed a petition with the European Court of Human Rights (ECtHR) to try to prevent his deportation based on concerns for his security were to be returned.

The latest asylum application is pending with the Dutch asylum authorities. It will be a challenge for Ngudjolo and his lawyers to argue that the situation has changed and that he has the right to remain in the Netherlands.

This week a Dutch court reportedly ordered his immediate release from border detention. This was in turn appealed by the Dutch authorities. At the time of writing, he remains in custody.

To better understand the second application it is important to look at the first one. Why was it rejected? Has the situation changed since?

In October 2014, the highest Dutch administrative court rejected Ngudjolo’s first application for asylum. The court agreed with the deputy minister’s rejection of the application in the first place.

The Dutch court ruled that Ngudjolo could not apply for asylum under the 1951 Refugee Convention because of his military background—as a commander of the Congolese militia groups Front des Nationalistes et Intégrationnistes (FNI) Force de Résistance Patriotique en Ituri (FRPI).

The judges found that there were serious reasons to believe that Ngudjolo had committed a crime against peace, a war crime, a crime against humanity or that he had committed a serious non-political crime outside the Netherlands before his admission as refugee. This would mean that the refugee convention could therefore not be applied to him.

Ngudjolo’s ICC acquittal was not taken into account in the asylum application decision as the two have differing standards of proof. The ICC requires proof “beyond reasonable doubt” for a conviction. Asylum application in the Dutch system can be rejected if there are “serious reasons” to believe someone committed serious crimes—a much less strict requirement.

The court also agreed with the deputy minister that Ngudjolo failed to prove that he has reason to fear the DRC authorities upon return. Ngudjolo had argued that he would face treatment in violation of Article 3 (prohibition of torture) of the European Convention on Human Rights, which contains the prohibition of torture, if he would be returned to the DRC.

However, even though it was allowed under Dutch law, and the ICC indicated it did not have a problem with it, Ngudjolo was not deported at this point due to a 2005 UN travel ban. He was placed in a Dutch detention center, then reportedly at a hotel in The Hague paid for by the ICC.

As the ICC continues to grow it faces ever more legal obligations and logistical challenges. Voluntary cooperation from states (such as acquittal agreements, witness relocation/protection and hosting detainees on interim release) is crucial to the Court’s ability to function fairly and effectively.

Last year Belgium became the first ICC member state to agree to temporarily host detainees on interim release from the Court. Yet no state has so agreed to host persons acquitted by the Court.

The Ngudjolo case has made clear that such agreements are urgently needed. Until then, it is likely that the Netherlands will continue to see requests for asylum from ICC defendants.

Have your say – are governments doing enough to support the ICC?