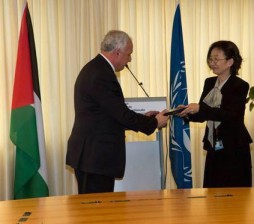 The ICC Rome Statute officially entered into force for Palestine this week, marking an important step towards accountability and justice for victims in one of the world’s longest-running conflicts.

Palestine became the 123rd state to join the ICC on 1 April, having deposited its instrument of accession to the Rome Statute with the UN in January. The ICC will have jurisdiction over war crimes, crimes against humanity and genocide committed within Palestinian territory, and over Palestinian nationals, from that date forward.

William R. Pace, convenor of the Coalition for the ICC.

“The Rome Statute’s entry into force in Palestine gives hope to victims in both Palestine and Israel that they might see justice done and the conflict brought to a peaceful end. The international community must now stand with victims of the Israeli-Palestinian conflict, support the ICC process and efforts to promote accountability at the national level. Civil society is now calling on Palestinian authorities to bring their national laws in line with the Rome Statute to allow for full cooperation with the ICC and effective domestic investigations into alleged atrocities.”

Civil society has been working to encourage Palestine and Israel to join the ICC for years now. In 2013, our Coalition called on both to join the Court as part of its Campaign for Global Justice.

#Palestine formally accedes to the Rome Statute of the #ICC tomorrow, 1 April 2015.

Palestine is the third state from the Middle East and North Africa region to become party to the Statute, following Jordan and Tunisia.

“The ICC can provide accountability for war crimes and crimes against humanity that were allegedly committed against the protected Palestinian civilians and their properties. It is another important step that moves us closer towards justice.”

Dr. Ishai Menuchin, executive director of the Public Committee Against Torture in Israel:

“All Israeli citizens who hold human rights and democratic values dear should support Palestine’s bid to join the ICC. It is time that universal values and norms become the framework through which the Israeli-Palestinian conflict is viewed and resolved. It is time that complaints of torture and suspicions of war crimes be examined by the Israeli justice system. Otherwise, they will be investigated by The Hague.”

Last December, Palestine made a declaration under Article 12(3) of the Rome Statute retroactively accepting the ICC’s jurisdiction from 13 June 2014. The ICC prosecutor has opened a preliminary examination to determine whether to proceed with a full investigation into grave crimes allegedly committed during that timeframe.

As a state party to the Rome Statute, Palestine can now participate as a member state during sessions of the ICC’s governing body, the Assembly of States Parties, including nominating and voting for judges and other elected Court officials.

Learn more about Palestine joining the ICC – check out our factsheet and infographic below:

This entry was posted in Middle East/North Africa, Ratification and Implementation of the Rome Statute and tagged Palestine. Bookmark the permalink.