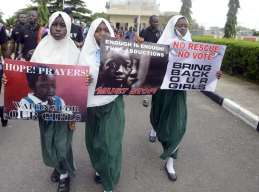 Accountability is urgently needed for continuing grave crimes against Nigerian women and girls civil society said this week—the anniversary of the Boko Haram kidnapping of 276 schoolgirls in the northern Nigerian town of Chibok, many of whom remain missing.

A new Amnesty International (AI) report on alleged Boko Haram crimes claimed that at least 2,000 women and girls have been abducted since the start of 2014. Many are said to have been forced into sexual slavery and trained to fight.

The International Federation for Human Rights (FIDH) called on Nigerian authorities to do more to find the missing Chibok girls and reunite them with their families. The group also urged the ICC, which has an ongoing preliminary examination in Nigeria, to open a full investigation.

Nigeria’s president-elect, Muhammadu Buhari, pledged to do all possible to rescue the kidnapped girls, but cautioned that there was no guarantee they would be found.

The Global Justice Center also called on the ICC to investigate the Chibok kidnapping as an act of genocide.

Meanwhile, Boko Haram militants killed at least 20 people in Borno state. The Nigerian military said that it is in the final phase of expelling the insurgent group from the country.

Hundreds of protesters clashed with UN peacekeepers in the CAR, leaving one dead and dozens injured.

Kenya
AI reiterated its demand for the government of Kenya to provide justice and reparations for victims of the 2007-08 post-election violence. The Hague Trials Kenya outlined the prosecution’s version of events relating to the 2008 Naivasha post-election attack, as found in the prosecutor’s pre-trial brief from the case against Kenyan President Uhuru Kenyatta.

Darfur
In a Jakarta Post op-ed, the Human Rights Working Group’s Yuyun Wahyuningrum urged Indonesia not to invite Sudanese President Omar Al-Bashir to the Asian-African Conference. A Sudan Tribune columnist called on the international community and the African Union (AU) to adopt new approaches to stand up to Al-Bashir in order to secure peace.

Sudan’s presidential election, protested by displaced persons in Darfur and extended due to low turnout, is expected to prolong President Omar Al-Bashir’s rule. An AU panel found that credible elections are not currently possible in Sudan.

Democratic Republic of Congo
Bosco Ntaganda’s counsel wants to delay the opening of his trial until November. Physicians for Human Rights called for the investigation of a spate of at least 35 rapes in Kavumu, eastern DRC.

Uganda
Academic expert Mark Drumbl said that Dominic Ongwen’s ICC case demonstrates the difficulties of achieving justice when the defendant is also a victim. Reporter Peter Dörrie argued that the Lord Resistance Army (LRA) is collapsing. The Ugandan Supreme Court ruled that the trial of Thomas Kwoyelo, a former LRA commander, must resume before the Ugandan judiciary’s International Crimes Division.

The main Tuareg rebel alliance refused to accept the initial peace agreement “in its current form” after Mali’s foreign minister asked the UN Security Council to pressure the rebels to sign the deal.

Côte d’Ivoire
Ivorian President Alassane Ouattara indicated that he rejects transferring any more suspects to the ICC and prefers domestic prosecution of perpetrators of the 2010-11 post-election violence. An advisor to the ICC prosector told Justice Hub that the cases against Laurent Gbagbo and his allies were prioritized due to resource limitations, but that the investigation in Côte d’Ivoire has focused on all sides.

Preliminary Examinations
Nigeria civil society groups called on the ICC to investigate Rilwan Akiolu, the Oba of Lagos, for his alleged threats against the Igbos.

Al-Haq published a Q&A on the Palestine preliminary examination. HRW’s Bill Van Esveld arguedthat alleged Israeli actions taken to force residents in the West Bank from their homes are crimes under the Rome Statute. A Hamas senior official said that Hamas is willing to cooperate with the ICC but will not hand anyone over to the Court unless “the Israeli occupation leaders appear first.”

AI called on Ukraine to accept ICC jurisdiction over crimes allegedly committed during the conflict in eastern Ukraine, citing evidence of war crimes in Donbass. Ukraine’s security service announced that it will hand over all investigations into alleged abuses of power by former president Viktor Yanukovych to the ICC.

Colombia‘s attorney general is investigating 22 generals for their alleged roles in the murder of civilians in the “false positives” scandal. A suspected FARC rebel attack in western Colombia killed at least 10 soldiers, prompting Colombian President Juan Manuel Santos to order the resumption of air strikes against the rebels and putting ongoing peace talks in doubt.

Campaign for Global Justice
The Coalition for the ICC called on Malaysia to accede to the ICC Rome Statute. Blogger Mark Kerstenconsidered what the US-ICC relationship might look like under a Hillary Clinton presidency.

What else is happening?
HRW’s Phil Robertson called for North Korean leader Kim Jong-un to be tried at the ICC.

HRW called on the UN Security Council to act to address and prevent sexual violence during conflict after a UN report revealed an increase in the use of rape and sexual violence as a tactic of war.

FIDH, TRIAL and the European Center for Constitutional and Human Rights published a review of 2014 cases involving universal jurisdiction.

Academic Barrie Sander lauded ICC Prosecutor Fatou Bensouda’s recent use of her office as a symbolic power to draw attention to atrocities allegedly committed by ISIS.

UN Secretary General Ban Ki-moon said that the rule of law and access to justice are necessary for sustainable development. Spain announced a proposal to create an international court specializing in terrorism-related crimes. The Economist argued that clarifying the meaning of ‘crimes against humanity’ is necessary in order to prevent them from being overshadowed by genocide.