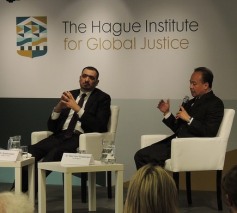 An expert panel has released its report on the two candidates from the Asia-Pacific region vying to fill a judicial vacancy at the ICC this June.

In accordance with Art.36 of the Rome Statute, an Assembly of States Parties Advisory Committee on Nominations of Judges (ACN) was established to facilitate the nomination and election of the highest qualified officials, in line with criteria for office prescribed by the Statute.

Once the ACN has has interviewed the candidates, it prepares information and analysis, of a technical character, on the suitability of the candidates running for election to the ICC bench.

Their report is made available to ICC member states and observers to allow for thorough subsequent consideration by the ASP before the election.

Dr. Ibrahim Aljazy and Dr. Raul Cano Pangalangan—put forward by Jordan and The Philippines respectively—are the two candidates in the running.

The ACN conducts face-to-face interviews and considers written material submitted by the candidates in the form of statements of qualifications and curricula vitae.

It also considers the language skills of the candidates, their moral character and places importance on the health and any other factor which may hinder the candidates from fulfilling their judicial term.

While the ACN is wholly independent from the Coalition for the ICC, the Coalition has welcomed the establishment of the ACN and is committed to supporting it in fulfilling its mandate and further improving the ICC judicial elections.

The Coalition has strongly urged ICC member states to give their full support to the ACN and to pay due regard to its findings and recommendations.

Campaign to ensure the election of the highest qualified candidates
To help ensure that the most highly qualified candidates are elected as judges by the ASP, we undertake a comprehensive elections campaign every judicial election. We do not endorse, or take any position on, any ICC judicial candidate. However, we work to ensure that the elections are as fair, transparent and merit-based as possible, and free from vote-trading and based purely on the expertise of the judicial candidates. This includes organizing panel discussions to allow state representatives, civil society and the wider public to learn more about the candidates’ qualifications, experience and expectations for international justice.

We also asked the judicial candidates to fill in comprehensive questionnaires to gain more insights into their experience and expertise, their vision for the ICC, the challenges facing the ICC, gender justice and victims’ rights among other topics.