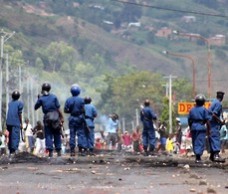 Perpetrators of violence ahead of elections in Burundi risk prosecution, the ICC prosecutor warned last week.

ICC Prosecutor Fatou Bensouda expressed concern over violence and rising tensions ahead of Burundi’s legislative elections on 26 May and presidential elections on 26 June.

Protests against Burundian President Pierre Nkurunziza’s decision to run for a third term have turned violent, and police have allegedly used disproportionate force against demonstrators. At least two protesters have been reported killed.

Bensouda warned that the Court has jurisdiction over any war crimes, crimes against humanity or acts of genocide in the country, which is party to the ICC Rome Statute.

“Any person who incites or engages in acts of mass violence including by ordering, requesting, encouraging or contributing in any other manner to the commission of crimes within ICC’s jurisdiction is liable to prosecution before the Court. The primary responsibility to investigate and prosecute perpetrators of mass crimes falls, in the first instance, on the national authorities. That failing, however, no one should doubt my resolve to investigate and prosecute individuals responsible for committing crimes under ICC jurisdiction.”

Bensouda drew upon the experiences of Kenya and Côte d’Ivoire, both of which experienced widespread election-related violence and are now subject to investigations by the ICC. She also pointed to Nigeria as an example of peaceful elections.

Have your say – will the prosecutor’s statement have an impact in Burundi?

This entry was posted in Africa and tagged Burundi. Bookmark the permalink.