Nigeria’s military was this week accused by civil society of committing war crimes in the course of its battle with Boko Haram.

Amnesty International called for investigations of the military, including five senior commanders, alleging that as many as 8,000 people have been murdered, starved, suffocated or tortured to death while in military detention. The group also called on the new Nigerian government to ensure the protection of civilians and end the culture of impunity within the military.

The Boko Haram meanwhile stepped up attacks in the week following President Muhammadu Buhari’s inauguration, including a bombing that killed at least 50 people in Maiduguri. A Spanish judge opened an investigation into the insurgent group and its leader for alleged crimes against humanity and terrorism.

Nigeria is the subject of a preliminary examination by the ICC in order to determine whether a full investigation is warranted. 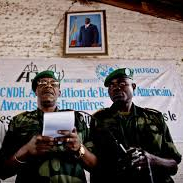 This week, the parliament of the Democratic Republic of Congo (DRC) voted unanimously for national legislation to implement the ICC Rome Statute – a long awaited measure that will allow it fulfill its obligation to prosecute grave crimes domestically.

Parliamentarians for Global Action applauded the decision as crucial to promoting the fight against impunity and access to justice for victims of genocide, crimes against humanity and war crimes, adding that it was made possible by the “leadership and consistent contribution of PGA Members from all major political parties in the Democratic Republic of Congo, who are now mobilized to ensure the swift adoption of this Bill in the Senate.”

Local and international civil society has been working for many years for the passage of the legislation through parliament.
TAKE A STAND FOR JUSTICE
Call on Armenia to join the ICC

Central African Republic
The ICC Appeals Chamber reversed a decision granting interim release to Jean-Pierre Bemba and four of his associates facing trial for witness tampering charges, but decided that it would not be in the interests of justice to re-arrest them. The UN human rights chief called for intensified investigations into allegations of child sex abuse by UN soldiers in the CAR, and the UN secretary general launchedan independent inquiry. Victims in the CAR want justice and accountability, AFP reported.
Kenya

A displaced Kenyan said that victims of the 2007-08 post-election violence are disappointed with how the ICC has handled the Kenya cases and have lost hope in the Court.

Judges won’t allow the Kenyan government to make submissions on the prosecutor’s request to enter previously recorded statements of reluctant witnesses as evidence against Deputy President William Ruto and broadcaster Joshua Sang. Half of Kenyans polled believe that either Ruto or Sang will be convicted at the ICC, and many fear ethnic violence if Ruto is convicted. Leaders of the Jubilee coalition asked the ICC to drop the case against Ruto and Sang.

A Kenyan group is seeking to block the NGO, Africog, from filing observations on the ICC prosecutor’s request to have the Kenyan government referred to the Court’s governing body for non-cooperation regarding the case against Kenyan President Uhuru Kenyatta.

Darfur
IRIN reported that violence in Darfur has surged to its highest levels in a decade. Sudanese President Omar Al-Bashir was sworn in for another five-year term. Opposition forces and people in Darfur denounced Al-Bashir’s inauguration, while Elise Keppler of Human Rights Watch (HRW) said that ICC member states should promote his arrest.

DRC
A decision on whether Bosco Ntaganda’s ICC trial will open in the DRC is expected next week. A suspected Mai Mai rebel attack on the Goma airport killed at least four government soldiers.

Libya
A Libyan court will rule on Saif Gaddafi, Abdullah Al-Senussi and other former regime officials charges with crimes against humanity and war crimes on 28 July. A UN envoy said that Libya risks becoming a failed state.

The International Federation for Human Rights and the Malian Association of Human Rights called the Malian government or the ICC to investigate and prosecute those responsible for the alleged murder of six civilians in northern Mali. Al Qaeda’s North African arm took responsibility for two attacks on UN peacekeepers this week. ICC expert Mark Kersten questioned why the Court’s investigation in Mali has made little progress to date.
Uganda
Legislators from Uganda’s Amaru district are planning on travelling to The Hague with Dominic Ongwen’s relatives to meet the former Lord’s Resistance Army (LRA) commander. A former LRA abductee called on a Ugandan official to not stigmatize former LRA fighters, many of whom were abducted and forced to fight.Côte d’Ivoire
International law expert Kevin Jon Heller questioned the wisdom of the Appeals Chamber’s confirmation of the Simone Gbagbo case’s admissibility, reasoning that while the ruling was technically correct, the ICC is not best served by prosecuting individuals already convicted of related charges by national courts. Laurent Gbagbo’s health was discussed at the ICC (in French).
Preliminary Examinations
The European Center for Constituional and Human Rights’ Anna V. Gall argued that the ICC should take action on alleged sexual and gender-based crimes in Colombia. The International Center for Transitional Justice said that the punishment of the FARC should not undermine Colombia’s peace process. The FARC insisted that none of its people should face jail time.

The leader of South Ossetia, a breakaway territory of Georgia, met with Russian President Vladimir Putin in Moscow to discuss an integration treaty signed between their governments.

Palestine plans to submit information to the ICC this month regarding the expansion of Israeli settlements. A Middle East Monitor columnist called on the ICC to prosecute Israeli officials and doctors for alleged acts of torture. Israeli forces launched airstrikes in Gaza after two rockets were fired towards southern Israel. An international lawyer criticized the ICC prosecutor’s decision not to open an investigation into the 2010 raid on a Gaza-bound humanitarian flotilla.

Fresh fighting between government and separatist forces broke out near Donetsk, Ukraine.

Campaign for Global Justice
UNESCO’s director-general welcomed a UN General Assembly resolution on protecting cultural heritage sites that called on all UN member states to ratify the Rome Statute.
What else is happening?

Malawi said that it will not heed calls to withdraw from the ICC Rome Statute leading up to next week’s AU summit.

The prospect of a new trial for former Guatemalan leader Efrain Rios Montt is becoming increasinglyunlikely.

ICC expert Mark Kersten looked back at when former chief prosecutor Luis Moreno-Ocampo was almost appointed as an ‘ethics and corruption czar’ for FIFA.

A Malay Mail columnist considered whether the Rohingya can obtain justice through the ICC.
Want to receive news like this in your inbox? Sign up here for weekly mail updates.