Africa and the ICC: Moving the narrative forward 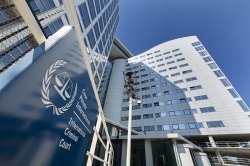 The seat of the ICC in The Hague. © Michel Porro/Getty Images

In this guest post from Humanity United, Senior Fellow Akwasi Aidoo discusses the difficult but important relationship between the ICC and African states, and what can be done to improve it.

The International Criminal Court (ICC) is one of those international institutions that would have had to be created if it didn’t already exist. In 2002 when the ICC was finally established to operationalize the Rome Statute, the international community had gone through many years of protracted negotiations to figure out the institutional requirement for making international criminal justice a firm reality beyond the rhetoric.

The jurisdiction of the ICC is to prosecute individuals charged with the international crimes of atrocity, namely genocide, war crimes and crimes against humanity. As an international tribunal whose mandate is to complement national judiciaries, the ICC’s jurisdiction kicks in only when national judiciaries are either unwilling or unable to prosecute cases or when the Security Council of the United Nations refers cases to it; and the latter has often been stirred controversy because three members of the permanent members of the Security that have a veto vote (China and Russia and the USA) have not ratified the Rome Statue.

It is noteworthy that virtually all the cases referred to the ICC since its inception are African, which is the primary basis upon which African leaders like Presidents Museveni and Mugabe have characterized the ICC as “a tool of Western imperialism.” It is also noteworthy that the ICC’s Office of the Prosecutor is headed by an African, Ms. Fatou Bensouda, who succeeded the first and controversial Prosecutor, Mr. Luis Moreno-Ocampo.

As the largest regional bloc in the ICC, Africa occupies a unique space in the ICC system, and yet Africa’s support for the ICC hit its lowest point when the African Union convened an Extraordinary Summit in October 2013 to review the relationship between Africa and the International Criminal Court (ICC). There were loud calls for African countries to withdraw, en bloc, as States Parties to the Rome Statute and from collaboration with the ICC. While the trigger for this move was the ICC cases against the newly elected Kenyan President (President Uhuru Kenyatta) and his deputy (William Ruto), in reality the damaged relationship has a longer history based on perceptions and accusations of the ICC being biased against Africa. When African States first signed on to the Rome Statute as the largest regional block, the relationship was full of sparks. Now, it has gone remarkably stale.

On the Africa side, international criminal justice is an imperative that the continent’s people cannot do without because of the long history and continuing realities of unspeakable crimes of atrocity, which are almost always augmented by impunity. And much of this is directly linked to wars in settings where judicial institutions are ineffective, while Africa has some of the largest numbers of civilian victims of atrocity crimes.

The impact of atrocities in Africa is horrendous. In many of Africa’s most populous areas that have become war lands—places where people are caught in an almost inextricable web of war (e.g. the Horn of Africa, the Great Lakes region, central Africa, and the Mano River region, with a combined population of nearly 280 million people) —the immediate and cumulative effects of war crimes are disastrous. In the Democratic Republic of Congo (DRC) alone, the International Rescue Committee estimates that 5.4 million people have died from what it calls the “world’s deadliest documented conflict since WW II.” The United Nations also estimates that at least 1,200 people, mostly children and women, are dying every day as a result of the war in DRC. During the genocide in Burundi (in 1993) and Rwanda (in 1994), over one million people were killed. In Somalia, Sudan, and DRC, war has become so intractable that there are whole generations without any memory of peace. In Zimbabwe, white minority rule cost countless lives and, as if that was not enough, soon after white minority rule ended in 1980, the Mugabe government embarked on horrific ethnic massacres in Matabeleland, which cost nearly 20,000 lives. In Nigeria, the Biafra War cost an estimated three million lives, and in Sudan, the war in the south and the genocide in Darfur cost hundreds of thousands of lives and over two million displaced people. The list goes on ad infinitum.

Restoring the humanity of Africans in this context requires effective institutions and mechanisms for deterring such atrocities and the impunity that the perpetrators have always enjoyed. The ICC is one such institution and mechanism. To be sure, it has weaknesses and is therefore not perfect, but it’s the only vehicle we’ve got in all of this darkness, and the vast majority of Africans have a strong stake in its success. Besides, there is increasing evidence that the ICC has some deterrence effect on potential perpetrators of political instability that can spark atrocity crimes. In Senegal, for example, it is now well known that the country was able to pull back from the brink of electoral violent conflict and possible massacres in 2012 because the leaders of the former government expressed fear about ICC prosecution and restrained their hawkish colleagues and “foot-soldier.”

What then are the next steps in repairing and fostering a constructive relationship between Africa and the ICC? For a start, there is a need to transform the narrative by amplifying African voices that echo the justice needs and interests of victims who no longer have voices or the ability to stand up for themselves. We need to move the narrative forward in two essential ways: (1) focusing more on the delivery of justice for victims and away from the politicized attacks from perpetrators; and (2) seeking ways to strengthen the ICC’s effectiveness, efficiency and independence by helping to strengthen a robust and constructive constituency for it in Africa.

The ICC is a powerful mechanism and platform for according the African continent and its citizens a good measure of anti-impunity and justice, global influence and credibility, and stability and the sustainable development that goes with it. In return, the ICC also stands to benefit considerably from Africa’s continued membership and engagement in it. First, Africa does make it a more representative and reputable global institution. Second, Africa can help to reform the ICC’s modus operandi in terms of efficiency and victim engagement, a process that has already started with the appointment of Ms. Fatou Bensouda as the Prosecutor of the ICC.

Imagine this: A few years down the line, the ICC does not collapse but emerges as one of the strongest, most effective and robust international institutions in which Africa has the largest membership! What better way to imagine a future in which there is an Africa-led global vehicle for delivering justice to mass victims of atrocity crimes around the world. Instead of serving as an excuse for a highly politicized disengagement from a key international mechanism, the ICC could provide Africa with a rallying platform for integration and bonding among democratic States.

Akwasi Aidoo is a senior fellow with Humanity United.

This post originally appeared on www.humanityunited.org/icc-series as part of Humanity United’s ongoing guest series on Africa and the ICC. For more information, please contact Akwasi Aidoo at aaidoo@humanityunited.org.

This entry was posted in Africa and tagged Africa. Bookmark the permalink.

3 Responses to Africa and the ICC: Moving the narrative forward