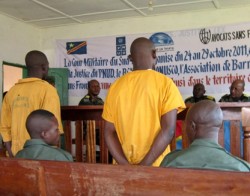 The National Assembly of the DRC took an important step in the fight against impunity earlier this month by adopting a bill that incorporates the ICC Rome Statute into domestic law.

The law enables Congolese courts to investigate, prosecute and adjudicate war crimes, crimes against humanity and genocide committed in the DRC. Adopted unanimously by the National Assembly of the DRC on 2 June 2015, it also contains provisions strengthening cooperation with the ICC.

The bill must now be adopted by the DRC Senate.

Parliamentarians for Global Action (PGA) hailed the work of its members in the National Assembly, who pushed for the bill’s adoption.

“As a Member of Parliament, it is a great honor to celebrate the unanimous vote by the Chamber of Deputies of the DRC for the adoption of the Law to Implement the Rome Statute of the ICC in the domestic legal order by the National Assembly of DRC. This step marks an important achievement in the fight against impunity for the most serious crimes of international concern in DRC. We are now strategizing to ensure a quick adoption by the Senate where our PGA Members have repeatedly pledged to support this bill in order to fulfill our obligations as a State Party to the Rome Statute and as a way to prevent reoccurrence of violence in DRC’s territory.”

PGA Congratulates the Unanimous Vote for the Implementing Legislation of the #RomeStatute of the #ICC in #DRC http://t.co/AcqoeeVw5R

Ms. Irène Esambo Diata, coordinator of the Centre for Justice and Resolution 1325:

“The DRC just made a giant step forward with the adoption by the National Assembly of the bill amending and completing the January 1940 decree on the penal code. Reading the bill, it’s clear the legislature took inspiration from the experience of the ICC.”

The DRC has been a member of the ICC since 2002. In order to fully participate in the ICC Rome Statute system, states must incorporate the Statute into their domestic legislation. Legislation on cooperation with the Court is similarly important, as the ICC lacks its own police force and relies on states to arrest suspects.

Descartes Mponge Malasi, DRC National Coalition for the ICC focal point for South Kivu and executive secretary of the ACADHOSHA:

“We, who are working on a daily basis on the field with victims, welcome this important step made by the National Assembly of the Democratic Republic of Congo by adopting this bill implementing the Rome Statute of the ICC. The way is still long, we must still be vigilant, as between the adoption by the National Assembly, and then by the Senate until the publication to the Official Journal, many obstacles can occur. The delay of the publication of the law criminalizing torture shows that we must stay mobilized.”

The DRC is still the scene of violent conflict between several armed groups, in particular in Northern Kivu. According to the International Rescue Committee, around 5.4 million people have died since 1998 in the ongoing conflict and thousands of victims are still waiting for justice.

With the ICC’s investigation focused on those most responsible for the worst crimes in the country, it is of utmost importance that the DRC’s national courts be able to prosecute lower-level perpetrators of international crimes. This law is a first step in that direction.

This entry was posted in Africa, Democratic Republic of Congo, Ratification and Implementation of the Rome Statute, Rome Statute and tagged complementarity, DRC, implementation, rome statute. Bookmark the permalink.