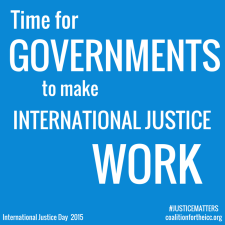 On International Justice Day, 17 July, global civil society called on governments committed to ending impunity for the world’s worst crimes to reaffirm their obligation to cooperate with the International Criminal Court by arresting fugitives.

“On the anniversary of the adoption of the ICC Rome Statute, all states—those party to the treaty and others—should renew commitments to cooperate with this historic and still new system of international criminal justice through all available avenues, from national laws to transnational agreements, said William R. Pace, convenor of the Coalition for the ICC. “States must ensure that anyone subject to arrest warrants for the worst crimes under international law should be detained and transferred to the Court regardless of their position.”

“When governments fail to arrest those accused, it is an insult to the victims who wait years for justice and recognition,” Pace added.

In June, Sudanese President Omar Al-Bashir, the subject of two ICC arrest warrants for war crimes, crimes against humanity and genocide allegedly committed in Darfur, travelled to the African Union summit in South Africa, a member of the Court. The ICC’s founding treaty, the Rome Statute, obligates all member states to execute the Court’s arrest warrants, and eliminates immunity for sitting heads of state or government. Following legal action by civil society, South African courts found that the government had failed to honor its obligation to arrest Al-Bashir, who secretly fled the country despite a court order barring his exit until the courts could rule on the matter.

“The Coalition is very proud that in the absence of political will to arrest high-profile suspects, civil society has successfully taken action to compel governments to honor their obligations to the Court,” said Pace.

This year, the Southern African Litigation Centre filed a lawsuit seeking the implementation of the ICC’s arrest warrants against Al-Bashir, forcing him to hastily leave South Africa before a ruling was made. Al-Bashir was also forced to flee from Nigeria in 2013 after the Nigerian Coalition for the ICC and other groups filed a lawsuit to compel his arrest. In 2011, following a visit to Kenya by the Sudanese president, a suit brought by the International Commission of Jurists prompted a Kenyan court to rule that the government is obligated to arrest Al-Bashir if he ever returns.

These actions demonstrate that national laws and courts remain the primary foundation of the Rome Statute system of justice, and that civil society plays a crucial role in ensuring that ICC member states live up to their obligations. While increased cooperation is still needed, especially in regards to arrest warrants, those wanted by the ICC find their actions increasingly restricted.

International Justice Day is celebrated on 17 July every year to commemorate the anniversary of the adoption of the Rome Statute, 17 years ago this year. It is a reminder of the urgency for all states committed to justice for victims around the world to ensure continued support for the international justice system. Coalition members are holding events worldwide to celebrate this day in solidarity with victims of grave crimes—including sexual and gender-based crimes— everywhere.

Statements on International Justice Day from Coalition members around the globe:

“International Justice Day is reminder that we are not national legal islands but parts of a global justice system,” said Ishai Menuchen, executive director of the Public Committee Against Torture in Israel. “It is a system that we have to be part of and that can support civil society efforts to change society and build a better life for all of us.”

“In 2014, blatant injustice fueled violence which took the lives of hundreds at Maidan. Then, rampant violations of international law scaled the loss up to the thousands. The number of victims continues to increase every day,” said Roman Romanov, human rights and justice program director for the International Renaissance Foundation, Ukraine. “Continued impunity for perpetrators is a sure way to sustain the cycle of violence and injustice. International crimes committed on the territory of Ukraine have to be addressed by the international justice system now, as this will help ensure justice at the national level in the future.”

Civil society from #Ukraine #Israel #Mexico and #Iran on the significance of the #ICC system for #justicematters http://t.co/uJWG2zUvl9

“The message behind 17 July is key to Mexico. The fight against impunity, the non-repetition of international crimes that abound in Mexico—such as enforced displacement, enforced disappearance, torture, executions, sexual crimes—must be addressed. The right of access to justice remains as crucial today as ever,” said Nancy Lopez of the Comision Mexicana de Defensa y Promocion de los Derechos Humanos. “For the Mexican Coalition for the ICC, International Justice Day is a key reminder that the Mexican state must honor its commitment to ensure that international justice is respected and enforced, and therefore, must abide with its obligations derived from the Rome Statute: the approval of an ICC cooperation law as well as the implementation of Rome Statute crimes within domestic legislation. Despite their relevance, these obligations have yet to be prioritized.”

“For international justice to take meaningful shape for victims of international crimes, states must concretely support, in both words and deeds, the accountability mechanisms that the international community has labored so intensely to put into place,” said Karim Lahidji, president of the International Federation for Human Rights. “Institutions themselves, such as the International Criminal Court, must also ensure that the needs and voices of victims are paramount to the justice process, from start to finish. We have the tools in hand to start chipping away at mass impunity—let us all cooperate to use these tools to sculpt a more just tomorrow.”

“There is not a more fitting date than International Justice Day this year, to remind the international community about the importance of ensuring that Sri Lanka keeps its promises on questions of justice and accountability. In exactly one month, Sri Lankans will take to the polls for parliamentary elections. We must work together to keep genuine justice and accountability at the heart of the government’s priorities. Despite welcome changes on the ground earlier this year, the government has yet to take concrete steps to establish a credible justice and accountability process in the country, as it promised,” said Niran Anketell, head of the Legal & Justice Unit at the South Asian Centre for Legal Studies. “Sri Lanka must demonstrate its willingness to distance itself from its violent past by cooperating on issues regarding human rights and international law. To keep victims at the heart of its accountability process, meaningful and broad-based consultations with civil society and those who suffered abuses to date, must be conducted.”

Tell us why #justicematters to you in the comment section below