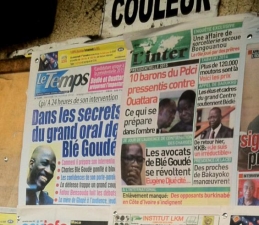 A newsstand displays the day’s papers on in October 2014, including headline coverage of a pre-trial hearing then underway in a case before the ICC stemming from Cote d’Ivoire’s 2010-2011 post-election violence. © Human Rights Watch 2014

Human Rights Watch (HRW) has concluded that a number missed opportunities has resulted in a failure of the ICC to maximize the impact of its work in Côte d’Ivoire.

In a report published this week on the Court’s record in the West African country, the group said that the ICC prosecutor’s decision to sequence investigations, focusing first on crimes allegedly committed by forces loyal to former president Laurent Gbagbo, was a misstep.

The report urged the ICC prosecutor to expand investigations to include allies of the current president, Allasane Ouattara.

It also called on the Court to expand its communications and outreach to a broader set of victims and communities, instead of engaging only with those affected by crimes currently being prosecuted.

“Additional ICC investigations are necessary, but the focus so far on pro-Ggbabo forces has deeply polarized opinion within Côte d’Ivoire about the ICC,” said Elizabeth Evenson, HRW senior international justice counsel. “Many victims feel that the court has ignored their suffering.”

Writing the The Globe and Mail, Evenson also stressed that opposition to growth in the ICC‘s budget from some of its main funders, including Canada, was partly to blame for constraints in expanding investigations and outreach activities.

Central African Republic
A UN peacekeeper was killed in clashes with armed assailants in Bangui. The UN Security Council condemned the killing.

Kenya
George Kegoro of the Kenyan section of the International Commission of Jurists argued that US President Barack Obama’s visit to Kenya showed indifference towards victims of Kenya’s 2007-08 post-election violence.

Darfur
Sudanese President Omar Al-Bashir reportedly plans to attend a UN summit in New York in September. The UN said that the decision to arrest Al-Bashir if he travels to New York would be made by the US government.

South Africa’s opposition gave notice of a parliamentary motion to impeach President Jacob Zuma over the Al-Bashir affair. Bashir Watch sent a letter to the president of Mauritania calling for the government to arrest Al-Bashir if he ever visits the country again.

The Sudanese government said that it will freeze court verdicts against rebels if they join national reconciliation talks.

Libya
HRW called for Libya to investigate the alleged abuse of Saadi Gaddafi and others in prison. Libya’s state prosecutor pledged to investigate the allegations. Saadi Gaddafi’s lawyers called for action to be taken against the prison and the Libya Dawn regime.The International Bar Association expressed concern over the trial of former government officials in Libya. Legal counsel for Saif Gaddafi and Abdullah Al-Senussi criticized the results of the trial.Amnesty International (AI) called on Libya to end rampant abductions by armed groups.

Mali
A former minister and member of the opposition was named head of Mali’s truth and reconciliation commission. Eleven Malian soldiers were killed in an attack on a military camp near Timbuktu.

Preliminary Examinations
The Bogota Post interviewed a Colombian law professor on the ICC and its role in Colombia.

Nigeria‘s military said that it rescued 178 Boko Haram captives. At least thirteen people were killed in a Boko Haram attack in Borno State.

The Palestinian Center for Human Rights and Al-Haq condemned the alleged killing of a Palestinian toddler by Israeli settlers. In response to the killing, Palestine submitted a dossier to the ICC on alleged “settler terrorism” against Palestinians in the West Bank.

Campaign for Global Justice
Parliamentarians for Global Action held a special session on ratification of the ICC Rome Statute by Lebanon and Iraq. Civil society organizations in Iraq called for the government to join the Court.

A Malaysian MP called on Malaysia to join the ICC in order to have the Court investigate the downing of MH17. A New Eastern Europe columnist argued in favor of Ukraine extending ICC jurisdiction to cover the shoot-down of MH17.

What else is happening
HRW welcomed Kosovo’s parliament vote to create a new war crimes court.

The US and Russia will back a Security Council resolution to identify those responsible for alleged chemical weapons attacks in Syria. Stephen Rapp, outgoing US ambassador for war crimes, told justiceinfo.net that the US has helped the ICC.

A professor of international law argued that the ICC should address crimes against the environment.