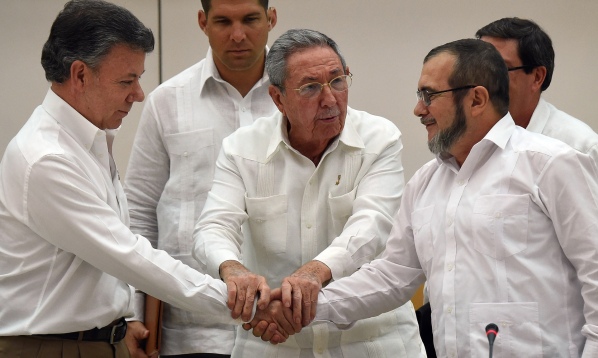 Deal reached on justice for Colombian war crimes
In Havana this week, Colombia and the FARC rebel group agreed to transitional justice measures as part of an historic, though yet to be concluded, peace deal to end the country’s 50-year-old armed conflict. The agreement envisages a special jurisdiction to prosecute conflict-related grave crimes committed by all sides. However, reduced and/or alternative sentences would be handed down to those who confess to crimes and contribute to establishing truth. A key component of the negotiation process has been the participation of victims and civil society.

Colombia has been under ICC preliminary examination since 2004 with the Office of the Prosecutor currently assessing whether there are genuine national investigations and prosecutions of grave international crimes committed in the country since 2002. ICC Prosecutor Fatou Bensouda welcomed this week’s agreement and its inclusion of a justice component that excludes amnesty for war crimes and crimes against humanity, saying her office will closely monitor the agreed provisions and their implementation. Coalition Americas Coordinator Michelle Reyes-Milk said the deal was cause for cautious optimism. The United Nations, the European Union, and the United States also all welcomed the agreement which is part of wider negotiations set to conclude in March next year.

The International Crisis Group welcomed the transitional justice agreement as a “sound, efficient and intelligent step forward” while Parliamentarians for Global Action hailed it as a ” paramount development”. Amnesty International also welcomed the deal but raised concerns around vague definitions and amnesties which could deprive victims of justice. Human Rights Watch warned the agreement allow those responsible for mass atrocities to avoid any time in prison.

The key to ICC success: Widening the reach of international justice
Writing on openDemocracy this week, James A. Goldston, director of the Open Society Justice Initiative, argues that much more must be done to address political inequities that are resulting in uneven justice for grave crimes around the world.

First ICC witness tampering trial to open: All you need to know
The trial of five men suspected of interfering with witnesses in the trial of Congolese politician and militia leader Jean-Pierre Bemba opens at the ICC next week. Bemba himself stands accused alongside four associates, including members of his defense team, in the first such case to come before the Court.

ICC investigations
Democratic Republic of Congo: ICC judges refused to reduce the 14-year sentence of convicted Congolese militia leader Thomas Lubanga, stating the next review for such reduction will take place in two years. Get up to speed on the ICC investigation in DRC.

Campaign for Global Justice
Sri Lankan civil society welcomed the UN’s call for a special hybrid court in the country and urged the country to ratify the ICC Rome Statute.

What else is happening?
ICC fugitive Omar al-Bashir has abandoned his plan to attend the UN general assembly in New York this week.

The Coalition partners in the Dutch government are divided over whether to support an extension of the ICC’s mandate to cover the “crime of aggression.”

Is personal jurisdiction over foreign-fighters fighting for ISIL a viable option for the Court to open a case into the group’s alleged crimes in Syria and Iraq?

Pro-government militias in Iraq may have committed war crimes when recapturing the city of Tikrit.

Amnesty International urged the UN to create a commission of inquiry for Yemen where alleged war crimes and international humanitarian law violations have been committed since the beginning of the conflict six months ago.