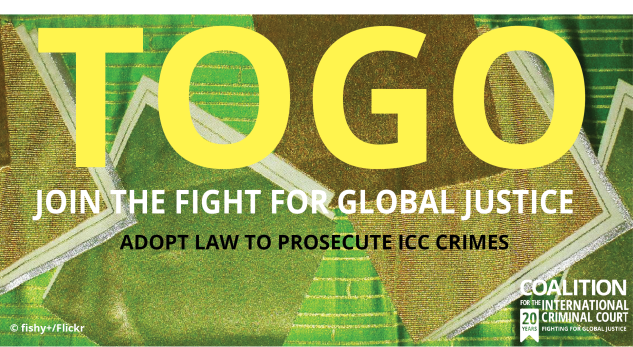 The president of Togo should urge parliament to pass a long-delayed bill on a new criminal code to allow for prosecutions of atrocity crimes. Add your voice now.

As the only ECOWAS State member which has not ratified the ICC Rome Statute, Togo is the October 2015 focus of our Campaign for Global Justice.

On 9 September 2014, the government of Togo submitted a bill on a new criminal code to parliament. The text contains provisions on the crime of genocide, war crimes, crimes against humanity and the crime of apartheid, but has yet to be passed by lawmakers.

In a letter this week to President Faure Gnassingbe, we urged Togo to implement the responsibility to protect within its national law to prevent mass atrocities thus contributing to the fight against impunity.

“President Gnassingbe has the opportunity to play a crucial role in the implementation of an effective justice based on complementarity by urging parliamentarians of our country to finally pass the new criminal code,” said Aime T. Adi, director of Amnesty International-Togo and coordinator with the Justice and Development Network. “President Gnassingbé, as guarantor of peace and justice, will also have to promulgate the new law.”

This implementation legislation will allow Togo to prosecute atrocity crimes domestically. The Coalition hopes for rapid advancement of this legislation as it will serve as an important stepping stone to eventual Rome Statute ratification.

This entry was posted in Africa, ICC and tagged Africa, Campaign for Global Justice, Cooperation, implementation, Togo. Bookmark the permalink.