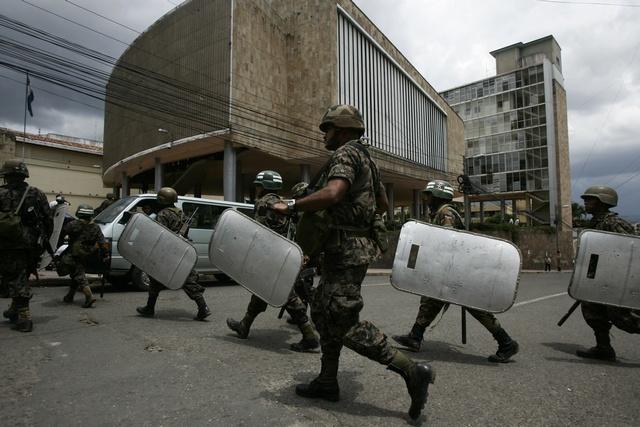 Soldiers arrive at the National Congress in Tegucigalpa on 28 June 2009. © Reuters

In global justice news this week: the ICC decides to not investigate allegations of crimes against humanity in Honduras; the UN (ACT) group launches its Code of Conduct; and news on India, Syria, Yemen and much more.

No ICC investigation in Honduras
The ICC Office of the Prosecutor this week decided not to investigate allegations of crimes against humanity in Honduras, saying the situation is not within its jurisdiction. The ICC prosecutor has been conducting a preliminary examination into serious human rights violations following a 2009 coup in the country. Civil society called for the international community to ensure justice is delivered with victims left with little hope for accountability at the national level.

All you need to know on the ICC and Honduras.

ICC investigations
Kenya: The Kenyan government requested the ICC not to be referred to the Assembly of State Parties to the Rome Statute for non-cooperation.

DRC: ICC judges rejected a request to shield from public view the face of a witness who was testifying in the trial of former Congolese militia leader Bosco Ntaganda.

Darfur: Both the ICC and non-governmental organizations urged India to arrest Omar al-Bashir during his visit to the country this week.

Uganda: The ICC presidency decided not to hold a key hearing in the trial against the Lord’s Resistance Army’s commander Dominic Ongwen in Uganda for security and financial reasons.

ICC preliminary examinations
Nigeria: Amnesty International–Nigeria says army officials should be brought before the ICC if national investigations are not opened into grave crimes allegedly committed by security forces.

Campaign for Global Justice
The UN Accountability, Coherence and Transparency (ACT) group launched its Code of Conduct regarding the UN Security Council action against genocide, crimes against humanity or war crimes.

Amnesty International says the US could do more to aid the UN taking action on genocide and war crimes by restraining use of the veto in these situations.

What else is happening?
The ICC and the African Union held a seminar in Ethiopia.

Does the migration flow from Syria make a war crimes indictment into the situation more likely?

At least two air strikes believed to be Russian apparently violated the laws of war according to Human Rights Watch.

The bombing of an MSF hospital in Yemen may amount to a war crime.

A new report urges the UN to investigate alleged genocide in Myanmar.

The African Union accused both government and rebels in South Sudan of alleged war crimes and crimes against humanity, recommending a hybrid tribunal be established to provide accountability.

An OSCE report claims Serbian prosecutions into war crimes allegedly committed in the 1990s have been inadequate and incomplete.

Find out more about current ICC cases in this interactive map.

2 Responses to #GlobalJustice Weekly – No ICC investigation in Honduras