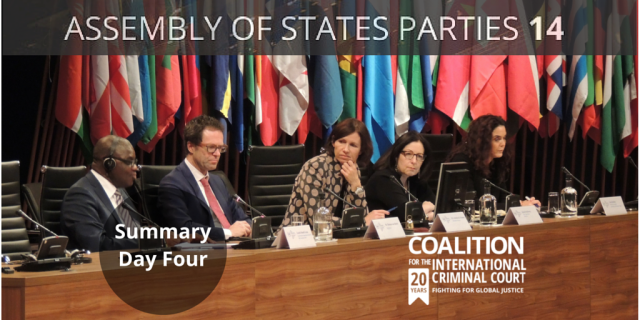 Day four of the annual Assembly of States Parties continued in The Hague today, with the discussion of the ICC’s 2016 budget and the omnibus resolution, along with several side events on strengthening the Court’s presence in the field and victims experiences of war crimes, crimes against humanity and genocide.

The ICC registrar and the president of the Committee on Budget and Finance (CBF) presented their annual reports on the Court’s budget, as well as external audits.

#ASP14: Registrar declares "further reductions to the budget will lead to inevitable consequences on judicial proceedings"

The ambassador of Austria to the Netherlands, coordinator of budgetary matters, circulated a proposal for the ICC’s 2016 budget. No agreement was reached on the CBF recommendation for an 8% budget increase. Several states are pushing for a lower percentage. Discussions will continue when the Assembly resumes on Monday morning.

On behalf of the ASP’s Oversight Committee, the Permanent Premises Project Director’s Office Short presentation on the ICC new permanent premises including a short video showing the stages of the building of the court.

Discussions of Kenya’s requests to the Assembly also continued. Kenya has proposed that two paragraphs be included in the so-called omnibus resolution (a catch all resolution on a range of issues aiming to strengthen the ICC and the ASP) related to the retroactive use of Rule 68 and the ICC Office of the Prosecutor’s use of witnesses. Governments will continue to attempt to reach consensus on the proposed text in informal consultations on Monday.

States must lead on ensuring victims’ rights, co-hosted The Institute for Security Studies (ISS), REDRESS, International Federation for Human Rights (FIDH) and Kenyans for Peace with Truth and Justice (KPTJ))

In discussions on victims reparations across the African continent, civil society representatives from the Institute for Security Studies, REDRESS, the International Federation for Human Rights, and Kenyans for Peace with Truth and Justice to represent a variety of perspectives on the situations and proposals for moving forward. Substantive comparisons were drawn between the ICC as a court of last resort and the need in domestic systems to better develop ‘first resorts’ in order to provide victims with the fullest opportunity to participate. Additionally, presentations recommendations for enhanced reparations plans.

Doumbia: while there are some domestic processes in Côte d'Ivoire, victims still excluded from processes. #ASP14 https://t.co/V5LhzCZvP6

Members of the American NGOs Coalition for the ICC briefed ASP participants on the status of United States relations with and policies affecting the ICC. Professor Linda Carter touched on aspects of the Obama administration’s “principled engagement” with the ICC and urged reactivation of the US signature on the Rome Statute. She also noted the US involves itself with the ICC on a case-by-case basis where there is a shared interest. Professor Jennifer Trahan advised against reaching too far too fast to perfect US-ICC relations. She also addressed the US’s contribution to the lapse of ICC cases arising from UNSC referrals, partly due to carve-out clauses preventing the UN from funding investigations that it refers. As Enid Adler pointed out, there is a standing resolution that the US cannot fund the Court, and because the US pays for a quarter of UN dues, the UNSC can’t pay for ICC referred situations.

Eventhough #US are not part of the Rome Statute, they are very collaborative and support every investigation #ASP14 @ABAesq's side event

Enhancing the Court’s impact on the ground: A strategic approach to ICC field presences and external operations (organized by the ICC Registry)

Panels and contributors highlighted the importance of field operations for the ICC, including victims participation, outreach, security, witness and victim protection, among other. They welcomed the ICC’s registry’s move to strengthen its field presence, and called on state authorities, UN missions, international organisations, NGOs to assist.

Practical and psychological importance of #ICC #fieldoffices, #outreach, and communications highlighted in #ASP14 side event. #GlobalJustice

Where is the evidence, the victims, the witnesses and the accused? In the field! @GretaBarbone @NpwjPress @IntlCrimCourt #ASP14

From admission to reparation: Heeding the voices of victims (co-hosted by the Victim’s Rights Working Group, Chile and Finland)

In a panel composed of grassroots victims’ organizations and representatives, including a counsel victims, participants offered perspectives from the field shared moving stories of victims affected by ICC crimes. They offered recommendations and called on states and the Court to do more to more to keep victims interests at the centre of the ICC’s work.

What’s next at the ASP?

The ASP will resume on Monday with the working group on the budget addressing the Assembly and informal consultations on the new ICC permanent premises.

The Coalition and its member the FIDH will co-host a Regional Meeting for Latin America and Caribbean States amid other Monday side events:

Creation of an ICC Association of Counsel: enhancing the active role of lawyers before the Court (co-hosted by Guatemala, the Netherlands, the United Kingdom and the Drafting Committee for the Constitution of the International Criminal Court Bar Association)

Africa and the ICC – Looking Back, Moving Forward (co-hosted by Botswana, Finland, Germany, the Netherlands, Norway, Sweden, Switzerland, the United Kingdom and the Wayamo Foundation)

As Kenya presented its ASP agenda, civil society activists were busy lobbying hard for its rejection. The Kenyan state will spend close to a million euro on sending a delegation of MPs to the ASP.  Did Kenya “hijack” ICC the ASP? States parties should zealously protect the court’s independence according to Human Rights Watch. Civil society calls on ASP members not to condone obstruction of justice from Kenya. Kenya: AU divided in Efforts to save Deputy President.

ICC must invest in greater outreach programs to give victims the tools to meaningfully participate in trials or fail to meet mandate.

Sign up today to receive daily ASP updates directly in your inbox.

This entry was posted in Uncategorized and tagged ASP 14. Bookmark the permalink.