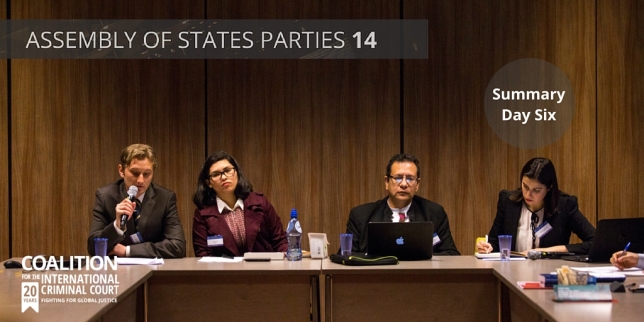 The efficiency and effectiveness of the ICC were at the center of discussions on the sixth day of the 14th session of the Assembly of States Parties in The Hague. States also agreed to delete article 124 from the Rome Statute. Side events were held on sexual and gender based crimes in Colombia, ICC performance indicators, the crime of aggression, and monitoring international crimes trials. Discussions are continuing on the ICC’s 2016 budget and on requests for additions to the omnibus resolution by Kenya and South Africa.

Discussions of Kenya’s requests to the Assembly also continued. Kenya has proposed that two paragraphs be included in the omnibus resolution (a catch all resolution on a range of issues aiming to strengthen the ICC and the ASP) related to the retroactive use of Rule 68 and the ICC Office of the Prosecutor’s use of witnesses. Governments are still trying reach consensus on the proposed text in informal consultations.

Overall sense from #ASP14 is #Kenya's undiplomatic behavior left delegations exasperated. Not even #SouthAfrica spoke in their favour. #ICC

Kenya’s top diplomat Amina Mohamed opens up on #ASP14, #Rule68 and why she still thinks of the #ICC as “our court” https://t.co/rsQIHa7kZz

South Africa has also proposed language to be included in the onmibus resolution to reflect discussions on its agenda item related to the application and implementation of article 97 and article 98 of the Rome Statute (on immunities and related cooperation). Governments are also attempting to reach consensus on the proposed text in informal consultations.

Statement of the #ICC Prosecutor- In asking 'Why Africa?' speculation is rife, impassioned and often simply wrong https://t.co/ZfH921AGM2

No agreement has been reached on the ASP Committee on Budget and Finance’s recommendation for an 8% budget increase for the ICC for 2016. Several states are pushing for a lower percentage. the budget facilitator has indicated that discussions will continue tomorrow at the working group on the budget, during which civil society organizations will take the floor.

The adoption on draft resolutions on both cooperation and permanent premises are still outstanding, with discussions resuming tomorrow.

Deletion of article 124 from the Rome Statute

ASP coordinators reported on the progress of discussions and negotiations on outstanding issues before the ASP, with the coordinator on amendments setting out the process on amending article 124 of the Rome Statute. States agreed to delete this provision from the Statute.

According to article 124, a state, on becoming a state party to the Rome Statute, may declare that for a period of seven years after ratification, it does not accept the Court’s jurisdiction with regard to war crimes allegedly committed by that state’s nationals or on its territory. Several Coalition member had been calling for the deletion of article 124 for many years.

Colombia and France are two countries are the only two countries to have used this transitional provision when they ratified the Rome Statute.

Colombia stated that deletion of article 124 is an advance in international justice.

As chair of Working Group of Amdmts, I just recommended @IntlCrimCourt #ASP14 to delete art 124 of the Rome Statute. pic.twitter.com/Ui9EmToNYe

#ASP14 The Working Group on Amendments considered the legal basis of deletion of Article 124; this was notified by #Norway to the depository

Efficiency and effectiveness of the ICC

Discussion on the efficiency and effectiveness of the criminal process ongoing at #ASP14 https://t.co/ePC0sm6Yu5

#ASP14 ICC Prosecutor: increasing efficiency is one of my key priorities

How can #ICC trials be more efficient? https://t.co/7SrVLUmnAQ #ASP14 pic.twitter.com/K1So0Y0Kum

Many emphasized the correlation between efficiency and state cooperation.

Plenary, now: #ICC Prosecutor confirms ongoing investigations in #Darfur, but warns "with more resources, we could do more(!)" #ASP14

.@DickerRichard: in turbulent world, we have common interest in effective & efficient #ICC; court officials & states each have role #ASP14

Richard Dicker @hrw, to make the #ICC more effective and efficient the responsibility is on states parties

Why We Monitor: Engagement, Advocacy and Accountability (co-hosted by RNW Media and OSJI)

This side event posed the question “Why do we monitor” at the centre for a discussion between a diverse set of actors involved in trial monitoring in the field. Jennifer Easterday underlined the importance of remaining neutral but also raised the difficulty of the endeavour due to the inherently politicised context in which trials often take place. Rosemary Tollo, Program Manager of web portal “Journalists for Justice” (ICJ Kenya), countered this perspective by noting that trial monitoring offers advocacy and outreach tools that can be used to reverse existing power relations in local communities. The speakers agreed that the strategies of trial monitoring depend on the aims of the organisation, the targeted audience and the context and needs on the ground. All speakers pointed out the need for developing creative outreach strategies in order to reach local communities.

Journalists for Justice says they don't intend to be neutral. Prosecution and defense get a lot of bandwidth, they focus on victims #ASP14

#ASP14 panel about monitoring. It's all about neutrality and being critical. Social media is a great tool. pic.twitter.com/ocn1iDNeAM

#ASP14 Finland is in the last stages of ratifying Kampala amendments, expected completion end of the year #PILPGatASP

12 Nov – the parliament of Lithuania approved ratification of the Kampala Amendments. #PILPGatASP

The ICC recognize the need to develop its own performance indicators, both from a quantitative and qualitative perspective. It has already started this process with identifying 4 keys goals for measuring the performance of the Court and then indicators to assess those goals. The OTP also identified 14 performance indicator to measure its own work. ICC officials insisted they were committed to this process but reminded the audience that we are only at the beginning of a long and difficult work for the ICC as a whole.

Speakers:
Ambasador of Germany to the ICC (Chair)
Navi Pillay – former UN High commissioner for human rights
Judge Sang-Hyun Song – former president of the ICC
Thomas Blumenthal: former judge at the ICJ, president of the advisory board and of the Academy
Athalia Molokomme: Attorney General of Botswana
Serge Brammertz: Under Secretary General and prosecutor at ICTY

This meeting was called to announce the start of the International Nuremberg Principles Academy. The panel presented it to the public, with the presence of some of the most prominent members of the Academy’s advisory board.

Complementarity: The situation relating to international crimes and sexual violence in Colombia (co-hosted by the Lawyers without Borders, the Working Group to monitor compliance with Order 092 of 2008 and Order 009 of 2015 of the Constitutional Court of Colombia & CICC)

Tomorrow at the ASP

Dispelling misconceptions and confronting challenges: Moving towards universality and full implementation of the Rome Statute (co-hosted by Cyprus & Denmark)

Accountability and the Prospect of a Political Solution to Conflict in Syria (hosted by Belgium, France, Italy, Liechtenstein, the Netherlands, the UK, and No Peace Without Justice)

Prosecuting Sexual and Gender-Based Violence: conversations with the OTP (hosted by the Institute for Justice and Reconciliation)

The Vital Role of Professional Associations of Lawyers. 25th Anniversary of the Adoption of the Basic Principles of the Role of Lawyers (Hosted by International Criminal Bar)

Kenya has failed to get its wish that the ICC amends Rule 68 which allows the use of recanted evidence.

The ASP bureau is expected to submit a report on Kenya’s two requests surrounding Rule 68 as well as on an audit of the ICC prosecution witness recruitment process.

The ICC is not a kangaroo court, says Kenya’s top diplomat Amina Mohamed.

Namibia may withdraw from ICC.

ASP 14 statements by the Georgian Yound Lawyers Association, Parliamentarians for Global Action, and the Benin Coalition for the ICC.

Sign up today to receive daily ASP updates directly in your inbox.

This entry was posted in Uncategorized and tagged ASP 14. Bookmark the permalink.