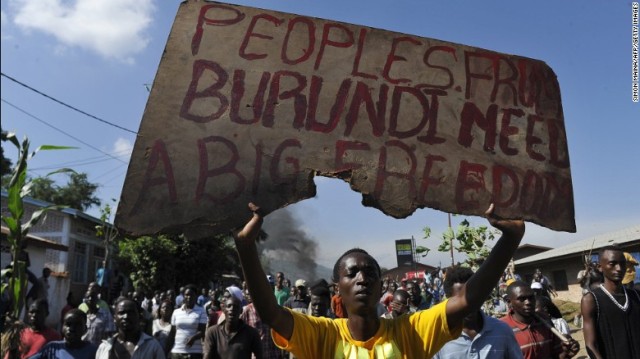 Burundian youth demonstrate in Musaga on the outskirts of the capital Bujumbura on 28 April 2015. © CNN

UN High Commissioner for Human Rights Zeid Ra’ad Al Hussein said that increasing numbers of serious crimes are being committed with impunity in the central African country, including alleged murder, sexual violence, enforced disappearances and torture. He also underlined that there is an increasing ethnic dimension to the crimes.

The report noted that at least 130 were killed in December 2015, double the number of killings during the previous month, and that at least 439 had been killed since the outbreak of protests on 26 April following the decision of President Pierre Nkurunziza to run for a third term in office.

The High Commissioner called for an independent, thorough, credible and impartial investigation into allegations of up to nine mass graves discovered last month.

The International Federation for Human Rights and the ITEKA League this weekcalled on the UN to immediately deploy an independent fact­finding mission to Burundi to shed light on these crimes and their perpetrators, to strengthen the protection of civilians, and to increase its presence in the area.

According to a leaked memo, the UN would not be able to repond to the outbreak of genocide in the country.

International Criminal Court investigations
Central African Republic: The UN pulled hundreds of Congolese soldiers out of its peacekeeping mission in CAR following new allegations of sexual abuse by its troops in the country.

Mali: An ICC pre-trial hearing in the case against cultural war crimes suspect al-Faqi al-Mahdi has been postponed to 1 March 2016 to give the defense more time to prepare its case.

Two UN reports documented atrocities that may amount to war crimes in northern Mali in 2014 and 2015.

Kenya: On 12 January, the ICC trial against Kenyan Deputy President William Ruto and broadcaster Joshua Sang for crimes against humanity allegedly committed during 2007 post electoral violence resumed in The Hague.

Uganda: ICC judges rejected a request to postpone the confirmation of charges hearing in the case against Lord’s Resistance Army (LRA) commander Dominic Ongwen. The hearing will take place on 21 January.

Michael S. Greco of the American Bar Association responds to allegations that the ICC used its communications to deflect from unflattering news stories and influence governments.

What else is happening?
Houthis rebels in Yemen allegedly committed war crimes by using a school to protect their forces.

The starving of civilians in the besieged town of Madaya in Syria may constitute a war crime according to the UN.

The trial of former president of Guatemala Rios Montt accused of crimes against humanity has been postponed due to procedural issues.

As heinous crimes are committed in various regions of the world, is there a need for a permanent hybrid tribunal for mass atrocities?

James Goldston of the Open Society Justice Initiative reflects on the legacy of the extraordinary chambers in Cambodia.

Sri Lanka’s president vowed to introduce constitutional reforms to prevent a return to civil war in the country.

How does the US perceive the ICC potentially having jurisdiction over the crime of aggression?

The ICC recently moved to its permanent premises. How did the first day in the new building go?