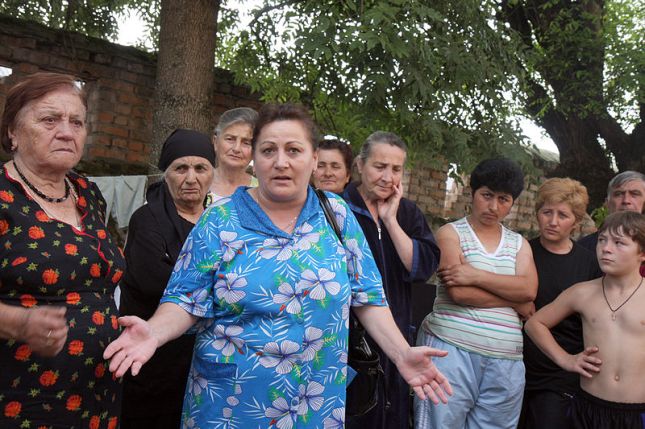 Refugees from South Ossetia in a camp in the town of Alagir, North Ossetia, 16 August 2008. The ICC prosecutor is investigating into alleged war crimes and crimes against humanity during the South Ossetia conflict which involved Georgia and Russia. ©Evstafiev/Wikimedia Commons

Judges of the International Criminal Court yesterday authorized a request by the Office of the Prosecutor to investigate ICC crimes allegedly committed in the context of the 2008 armed conflict in Georgia, which also involved Russia, over the self-proclaimed territory of South Ossetia.

HOW: On 27 January 2016, Pre-Trial Chamber I concluded that there is a reasonable basis to believe that crimes within the Court’s jurisdiction were committed in and around South Ossetia, Georgia, between 1 July and 10 October 2008. The Chamber received the representations by or on behalf of 6,335 victims of the conflict on 4 December 2015.

WHY: In its October 2015 request to judges, the OTP concluded that there was a reasonable basis to believe that crimes under ICC jurisdiction were committed in South Ossetia, and in areas in a “buffer zone,” from at least 7 August to 10 October 2008. The prosecutor has requested authorization to investigate from 1 July to 10 October 2008. These may include alleged war crimes committed in the context of forcible displacement of ethnic Georgians from South Ossetia as well as attacks against peacekeepers, and several counts of crimes against humanity.

NEXT STEPS: The ICC prosecutor can now investigate alleged crimes committed on the territory of Georgia by all individuals, regardless of their citizenship. The prosecutor may present one or more cases to ICC judges, who will decide whether to issue arrest warrants or summonses to appear.

COMMENTS: “After almost 8 years since the August 2008 war, perpetrators continue to live with impunity while victims of grave human rights and international humanitarian law violations are left without any redress, the long-awaited opening of an ICC investigation and prospects for justice is welcome,” said Ana Natsvlishvili, chair of the Georgian Young Lawyers Association. “We welcome the fact that the Judges clarified that the prosecutor can investigate all relevant acts and crimes as long as they are sufficiently linked to the 2008 conflict, and would fall within the Court’s jurisdiction.”

“We hope that the prosecutor will look into alleged attacks against and unlawful deprivation of liberty of civilians, sexual violence, alleged war crimes committed against Georgian prisoners of war and of civilians; as well as crimes committed in the region of Abkhazia, as victims reminded the judges,” Natsvlishvili added.

“The Coalition urges ICC states parties as well as international and regional organizations to cooperate fully with the Court and the prosecutor in this investigation. This includes facilitating the gathering of evidence as well as ensuring the arrest of suspects since the Court does not have its own police force,” said Virginie Amato, Regional Coordinator for Europe at the Coalition for the ICC. “It is crucial that the Court now develops a clear and tailored communications strategy, to reach out to victims and affected communities, and civil society, governments, media and the public at large, and start activities as soon as possible,” Amato continued.

“The Georgia investigation is a reminder that the ICC is dealing with more and different kinds of cases than envisioned at its creation in 1998,” said Elizabeth Evenson, senior international justice counsel at Human Rights Watch. “The court and its member countries should face reality about what the ICC will need in resources, in cooperation, and in political support to deliver on its mandate in this changed landscape.”

“Seven years after the war, none of the perpetrators have been prosecuted and victims are still awaiting redress. We hope that the ICC will bring justice and hold those most responsible of international crimes committed during the Georgia-Russia war accountable,” said Aleksandre Tskitishvili, Executive Director of Human Rights Center (HRIDC).

“We strongly urge the Office of the Prosecutor to also investigate the eviction of Georgians from the Kodori Gorge and destruction of their property as well as acts of torture, inhuman treatment and crimes of sexual violence committed against Georgian prisoners and civilians,” said Nino Tlashadze, Deputy Executive Director of Human Rights Center (HRIDC).

Moreover, Karim Lahidji, FIDH President stated that “we are witnessing a new chapter in ICC’s history. With the investigation into the situation in Georgia and preliminary examinations of the situations in Ukraine, Palestine, Afghanistan and Irak, the ICC is poised to make global impact. States Parties should strengthen their political and financial support to the Court to enable it to effectively fight impunity for the most serious crimes worldwide”.

Read more reactions of the Georgia Justice Minister and the Prime Minister’s Office.

BACKGROUND: Georgia ratified the Rome Statute on 5 September 2003, giving the Court jurisdiction over ICC crimes committed in the country from 1 December 2003 onwards. The OTP had been examining the situation in Georgia since 14 August 2008 in order to determine whether an investigation is warranted. The latest phase of the OTP assessment was examining whether effective national investigations were taking place into these crimes in Georgia and Russia. The OTP’s request to judges concluded that obstacles and delays hampered investigations in both countries, and that an ICC investigation was necessary as national proceedings in Georgia have recently stalled.

The ICC is the world’s first permanent international court to have jurisdiction over war crimes, crimes against humanity, and genocide. Central to the Court’s mandate is the principle of complementarity, which holds that the Court will only intervene if national legal systems are unable or unwilling to investigate and prosecute perpetrators of genocide, crimes against humanity and war crimes. There are currently ten active investigations before the ICC: the Central African Republic I & II; Democratic Republic of Congo; Darfur, Sudan; Kenya; Libya; Uganda; Côte d’Ivoire; Mali and Georgia. The ICC has publicly issued 33 arrest warrants and nine summonses to appear. Four trials are ongoing. There have been two convictions and one acquittal. Seven preliminary examinations currently ongoing, including into situations in Afghanistan, Colombia, Guinea, Palestine, Iraq/UK, Nigeria and Ukraine. The OTP has concluded preliminary examinations relating to Honduras, Venezuela, Palestine, the Republic of Korea and the Comoros referral, declining in each case to open an investigation.

WHO WE ARE: The Coalition for the International Criminal Court is a global network of civil society organizations in over 150 countries working in partnership to strengthen international cooperation with the ICC; ensure that the Court is fair, effective and independent; make justice both visible and universal; and advance stronger national laws that deliver justice to victims of war crimes, crimes against humanity and genocide. www.coalitionfortheicc.org

This entry was posted in georgia, Investigations and tagged georgia, russia, south ossetia. Bookmark the permalink.