El Salvador’s accession this week to the Rome Statute is the clearest expression of the country’s commitment to justice for grave international crimes, and brings the Latin American region a step closer to full representation at the International Criminal Court (ICC). The move comes after over a decade of advocacy by international and local civil society.

On 3 March 2016, El Salvador deposited its instrument of accession to the Rome Statute, the ICC’s founding treaty, at United Nations headquarters in New York, the last formal step needed to join the ICC.

“This is an extremely important and significant accession. El Salvador’s decision to join the ICC follows a lengthy and meticulous process that has seen the contribution of numerous actors, including civil society in El Salvador. It honors the country`s commitment to draw lessons from its recent past and take a firm stand against impunity,” said Michelle Reyes Milk, Americas coordinator for the Coalition for the ICC. “We hope that this accession is an important incentive for the remaining states in the Americas—Bahamas, Cuba, Haiti, Jamaica, Nicaragua, and United States—that have yet to join the ICC.”

Civil society in El Salvador welcomed the accession, highlighting the important advocacy carried out in the country over the past decade.

“The deposit of the accession instrument to the Rome Statute by El Salvador is a promising step in our hope for a strong rule of law in El Salvador, and which allows us to increase our commitment to international law and the respect for human rights,” said Wilfredo Medrano, Chair of the Salvadorian Coalition for the ICC. “We call on El Salvador to uphold the principles enshrined in the Rome Statute, and in this process enhance the legal institutions within Salvadorian society, as well as consolidate its cooperation with the International Criminal Court.”

In a well-attended and moving ceremony at UN headquarters, Salvadorian authorities—led by the Ministry of Foreign Affairs H.E. Hugo Martínez Bonilla—reaffirmed the country´s firm commitment to the principles enshrined in the Rome Statute, and thanked the different actors that had contributed to the accession process. 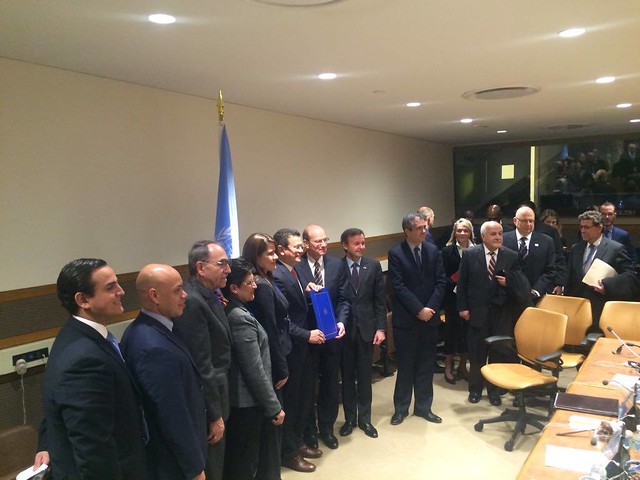 See more images of the ceremony on our Flickr page.

During the ceremony, William R. Pace, convenor of the Coalition for the ICC, stated that “the accession of the government of El Salvador to the Rome Statute of the ICC is one of the clearest examples of how, going forward, universality will be achieved. Leaders of communities and institutions throughout the international legal order and world community contributed to this accession over many years of efforts, including ASP presidents, ICC presidents, members of our international NGO coalition, and the important efforts of our national coalition in El Salvador.”

Pace also highlighted the crucial role of the Parliamentarians for Global Action, a member of the Steering Committee of the Coalition for the ICC, in the accession process.

29 of 35 states in the Americas have ratified or acceded to the Rome Statute, thereby accepting jurisdiction of the International Criminal Court.

In 2009, then-president Mauricio Funes declared his commitment to Rome Statute accession. Current President Sánchez Ceren, who assumed office in 2014, has now upheld this promise. During the Funes presidency, the foreign ministry issued a positive decision on accession in 2012, and submitted a Rome Statute accession bill to the presidential house. In May 2014, following strong advocacy from civil society as well as the key role of engaged parliamentarians, President Funes submitted the bill to congress, together with a bill on the implementation of Rome Statute crimes and principles into national law. On 26 November 2015, El Salvador’s parliament approved the bill and accession to the Rome Statute.

NGOs were instrumental in ensuring that government authorities addressed the legal and political obstacles that had prevented El Salvador from acceding to the Rome Statute. The campaign for Rome Statute accession included awareness-raising with government officials, parliamentarians, and the general public. Civil society also held advocacy meetings, sent letters to the president and government officials, provided technical assistance and addressed misconceptions on the role and mandate of the ICC.

FACTSHEET: Campaign for Rome Statute accession in El Salvador – Towards a universal justice for grave international crimes, Coalition for the ICC

El Salvador ratifies the Rome Statute and the Kampala Amendments on war crimes and the crime of aggression , ICC-ASP press release

The ICC is the world’s first permanent international court to have jurisdiction over war crimes, crimes against humanity, and genocide. Central to the Court’s mandate is the principle of complementarity, which holds that the Court will only intervene if national legal systems are unable or unwilling to investigate and prosecute perpetrators of genocide, crimes against humanity and war crimes.