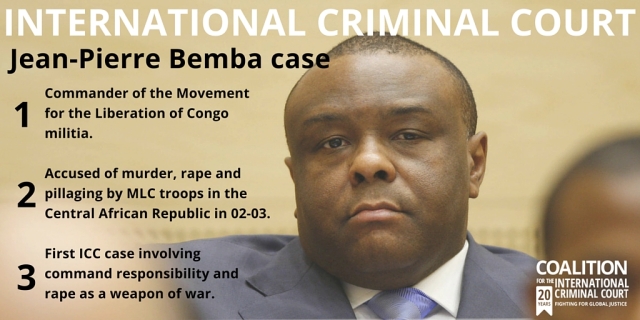 The ICC hands down its fourth ever judgment on 21 March 2016 in the case against Jean-Pierre Bemba. The Congolese politician and militia leader is charged with responsibility for grave crimes allegedly committed by a militia under his control in the Central African Republic (CAR) in 2002-3. Here’s all you need to know ahead of the much-anticipated verdict in the first ICC trial involving “command responsibility” and the alleged use of rape as weapon of war.

MLC suspected of murder, rape and pillaging in the Central African Republic in 2002-03

In late 2002, at the invitation of the then-president of CAR Ange-Félix Patassé, Congolese militia group Mouvement de Libération du Congo (MLC) formed a coalition with the CAR government to oppose a coup led by chief-of-staff François Bozizé.

After five months in the country, having failed to prevent the coup, MLC fighters allegedly went on a rampage of murder, rape and pillaging against Central African civilians.

The CAR government under Bozizé referred the situation to the ICC in January 2005. In April 2006, the CAR Cour de Cassation (the country’s highest criminal court)  found that the country’s justice system was unable to carry out effective investigations and prosecutions, and that that only the ICC was able to try the most serious crimes committed in the CAR since 1 July 2002.

Following a preliminary examination, in May 2007, the prosecutor announced the opening of the investigation into grave crimes allegedly committed in the CAR, with the peak of violence occurring in 2002 and 2003.

The ICC Office of the Prosecutor had indicated that it was waiting for the decision of the Cour de Cassation to decide whether to open an investigation in CAR, on the basis of the complementarity principle contained in the Rome Statute which holds that the ICC will only intervene if national authorities do not act.

In an October 2010 decision dismissing Bemba’s appeal against the decision on the admissibility of his case, the ICC Appeals Chamber said that CAR had “domestic inability to conduct this trial.”

Jean-Pierre Bemba charged with crimes against humanity and war crimes

In May 2008, ICC Pre-Trial Chamber II (PTC II) authorized the prosecutor’s request for an arrest warrant for Jean-Pierre Bemba, alleged MLC president and commander-in-chief Bemba also served as vice president of the Democratic Republic of the Congo (DRC) from 2003 to 2006.

The initial warrant listed one count of crimes against humanity (rape) and two counts of war crimes (rape and pillaging) allegedly committed by MLC troops during the 2002-3 internal armed conflict in CAR. In July 2008, judges updated the warrant, adding charges of murder both as a crime against humanity and a war crime.

The day after the the issuance of the warrant under seal, Belgian authorities arrested Bemba, who was in the country at the time, and surrendered him to the ICC.

In June 2009, PTC III sent the case to trial by confirming two counts of crimes against humanity (rape and murder) and three counts of war crimes (rape, murder and pillaging). Charges of torture and outrages upon personal dignity were dismissed.

In June 2009, PTC III granted a prosecution request recharacterize Bemba’s alleged role to “command responsibility” under Article 28(a) of the Rome Statute.

Although PTC II granted Bemba’s temporary release in August 2009 pending the start of trial, the Appeals Chamber overturned the decision in December 2009.

Bemba is the first ICC suspect to be prosecuted for alleged criminal responsibility as a military commander. The prosecutor alleges that he knew or should have known MLC combatants under his control were committing crimes, and that he failed to respond appropriately.

William R. Pace, Convenor of the Coalition for the ICC at the trial opening

“Victims and civil society in the Central African Republic have long sought justice for the terrible crimes Mr. Bemba is accused of committing.”

During the trial, which ran from 2010 to 2014, the prosecution argued that the MLC had a well-defined chain of command, stressing the use of radio transmissions as a means for Bemba to maintain remote command from DRC. As evidence of Bemba’s failure to exercise proper responsibility for those under his command, the prosecution said that Bemba made sparing and improper use of the MLC code of conduct, disciplinary board, and military tribunals, most of which he established.

Visits made by Bemba to CAR during the MLC campaign, speeches mentioning war crimes to his troops, correspondences related to official reports on such crimes, and inadequate training of MLC troops were also presented as evidence of Bemba’s effective command, of his knowledge of the crimes being committed, and of his failure to take responsible action.

Bemba denies the charges. His defense argued that former CAR president Patassé had operational control over the CAR-MLC coalition. The defence further said that the perpetrators of the charged crimes were not Bemba’s MLC combatants. The defence also argued that a conviction in the case would deter countries from offering military assistance to one another.

Trial judges were presented presented with 733 items of evidence and heard testimony from 74 witnesses.

Record number of victims participating in an ICC trial

At least 5,229 civilian victims—five of whom testified as witnesses—were authorized to participate in the Bemba proceedings, the highest number in the ICC’s history to date. Under the ICC Rome Statute, victims that participate in ICC trials may receive reparations if a guilty verdict is handed down.

Souhayr Belhassen, President of the International Federation for Human Rights at the Bema trial opening

“The number of victims applying to participate in this trial is unprecedented. Hundreds of victims of rape, murder and pillage have exercised their rights by requesting to take part in the proceedings.”

A landmark case for sexual and gender-based crimes

The Bemba trial is first at the ICC to focus on rape as a weapon of war, and has been widely hailed as a landmark case for the prosecution of sexual and gender-based crimes (sgbc) that continue to be committed in conflicts around the world. Sgbc have been prosecuted in other ICC trials, none have resulted in conviction.

The International Federation for Human Rights and members organizations:

“The trial has been of a crucial importance because of its particular focus on gender crimes and crimes of sexual violence. It has thus undeniably contributed to raising awareness of a destructive effect that the usage of sexual violence as a systematic weapon of war has on women and men and has helped to break the silence and the stigmatization of victims of rape.”

In opening the investigation in CAR, the then ICC prosecutor Luis Moreno Ocampo highlighted hundreds of victims reporting rape and other abuses committed “with particular cruelty.” The prosecutor also explained that this was the first time the ICC was “opening an investigation in which allegations of sexual crimes far outnumbered  alleged killings.” One report suggests that of around 1,000 civilian victims, 700 were rape survivors.

The Bemba trial featured the highest number of witnesses testifying to the commission of sgbc. Of 40 prosecution witnesses, 14 testified about sexual violence allegedly committed by Bemba’s MLC troops. Nine of 34 defense witnesses testified to rape charges, attributing the rapes to non-MLC combatants.

According to human rights and humanitarian organisations, victims/survivors were aged between six and 60 years old, with hundreds of cases of rape-related injuries, infections of STDs and AIDS, unwanted pregnancies, and some deaths, amidst the trauma of community rejection and shame for the victims/survivors, their spouses and members of their immediate family.

Women’s Initiatives for Gender Justice, Coalition for the ICC Steering Committee member, suggests that the sheer volume of evidence related to sgbc makes Bemba a landmark case, further noting that none of the three previous ICC verdicts have permitted victims’ reparations based on sgbc.

Brigid Inder, Executive Director of Women’s Initiatives for Gender Justice on the opening of the trial in 2010:

“This trial breaks new ground for the ICC, with evidence of sexual violence comprising a significant part of the Prosecution’s case, and as the first ICC trial to charge an accused for command responsibility for rape. The Bemba trial presents an opportunity for the Court to say firstly to women, that crimes of sexual violence are important enough to prosecute those who commit such acts; and secondly to leaders of armed forces and militias, that should they fail to prevent or punish subordinates for gender-based crimes, they will be held accountable.”

As the Bemba trial was concluding, the ICC prosecutor brought charges against Bemba and  four associates for suspected witness tampering. Those charges are being dealt with in a separate trial that began in September 2015.

The ICC prosecutor alleges that, since early 2012, defense witnesses were bribed to give false evidence. The prosecution believes Bemba used his detention center’s privileged telephone line to plan and coordinate the alleged criminal scheme with four Congolese nationals.

The four other accused are: Aimé Kilolo-Musamba, Bemba’s lead defense counsel at the time; Jean-Jaques Mangenda Kabongo, who was also part of Bemba’s defense team; Fidèle Babala Wandu, a member of parliament in the Democratic Republic of Congo (DRC) and deputy secretary general of Bemba’s militia Movement for the Liberation of Congo; and Narcisse Arido, an expert defense witness on military operations in the original Bemba case.

On Monday 21 March, ICC judges will deliver their verdict in the Bemba case in open court at 14:00 (The Hague local time).

In the event of acquittal, Bemba would be released on bail for his ongoing witness-tampering trial. Conviction, on the other hand, would be followed by a sentencing hearing and reparations proceedings for the 5,229 participating victims.

Both sides have the right to appeal the verdict.

In the event of a conviction, certain victims may be able to access the ICC’s unique reparations mandate through a Court reparation order implemented by the Trust Fund for Victims (TFV)

Security conditions in CAR have prevented the TFV from partnering with local groups to provide rehabilitative assistance at earlier stages in the case.

Bemba at the ICC : 15 years of FIDH action, from the field investigation to the Prosecutor’s conclusion, International Federation for Human Rights

ICC: Q&A on the Trial of Jean-Pierre Bemba, HumanRights Watch

First ICC witness tampering trial – all you need to know, Coalition for the ICC

How the CAR situation ended up at the ICC

Expert: How Bemba Soldiers Used Rape as a Weapon of War

What Does the Bemba Trial Mean to Victims?

Sign up for our weekly updates for the latest #GlobalJustice news and civil society views.