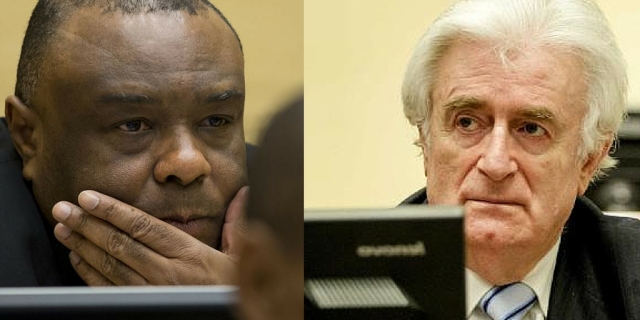 Bemba’s conviction at the permanent ICC for command responsibility for the war crimes and crimes against humanity of murder, rape, and pillage by his troops during in the Central African Republic (CAR) in 2002-3 has been widely hailed as a landmark in the evolution of international criminal justice and in the fight to end sexual and gender based crimes in conflict. The decision has been welcomed by civil society in CAR and the Democratic Republic of Congo, the International Federation for Human Rights, Human Rights Watch, Women’s Initiatives for Gender Justice, Amnesty International, the UN secretary general, the UN human rights chief, the United Kingdom, the United States, and Angelina Jolie, among others.

Karadžić’s conviction in one of the last cases at the temporary UN tribunal for the Yugoslav conflict for genocide for the 1995 Srebrenica massacre, the worst war crime in Europe since World War Two, among other crimes, has also been well received around the world. Karadžić, accused of being one of the chief architects of atrocities during the 1992-95 Balkans war, was found guilty on 10 out of 11 charges and sentenced to 40 years.

While appeals are likely in both cases, the decisions this week send a strong signal that commanders and political leaders will be held responsible and that “international justice will finally prevail.” Mass crimes involve those at the highest levels and it is precisely for this reason that the international community agreed to prohibit immunities in the ICC’s founding treaty, the Rome Statute. Time for  governments to step up and make justice truly global.

JusticeInfo briefly outlines the LRA’s violent legacy in Uganda, including Ongwen’s path from child abductee to first LRA commander to appear before the ICC.

Darfur, Sudan: JusticeInfo provides a look at ICC fugitive Omar al-Bashir’s travels since the Court issued an arrest warrant against him over seven years ago.

Kenya: The ICC prosecutor’s case against Kenyan Deputy President William Ruto and broadcaster Joshua Sang hangs in the balance as judges this week ordered the defendants to be present at the ICC on 5 April 2016 to hear a decision on their no case to answer motion.

Nigeria: With little hope of an investigation by Nigerian authorities, the Islamic Human Rights Commission has called on the ICC to open a preliminary examination of the December 2015 civilian massacre in Zaaria, Nigeria.

The Islamic Movement in Nigeria has meanwhile petitioned the ICC over the continued detention of its leader, Sheik Ibrahim El-Zakzaky.

Palestine: The Palestinian Liberation Organization and the Palestinian Authority presented documents to the ICC prosecutor as evidence of alleged war crimes by Israel and possibly Prime Minister Benjamin Netanyahu.

24 March marked the 6th annual International Day for the Right to Truth Concerning Gross Human Rights Violations and for the Dignity of Victims, celebrating the continued pursuit of truth and justice. Here’s all you need to know about the “right to truth.”

The ICC held a high-level seminar on cooperation this week in Bucharest, Romania to discuss issues such as witness protection, state cooperation in ICC investigations, building national capacity, and the advantages of joining the Rome Statute system.

A new study suggests the ICC can have a real impact on deterring intentional civilian killing, but only under the right conditions.

The UN Human Rights Council established a Commission on Human Rights to monitor violations in South Sudan and an independent expert panel on North Korea to study alleged crimes against humanity.

Former President of Guatemala Ríos Montt’s genocide trial started amidst controversy. Meanwhile, sexual violence victims from Sepur Zarco finally revealed their faces after their tormentor was sentenced to 120 years in prison for crimes against humanity.

The United States said it is reviewing civilian casualty allegations after claims that its recent attack on an Iraqi university could amount to war crimes under the Rome Statute.

This week authorities in Burundi capital Bujumbura uncovered a second mass grave, said to contain the bodies of at least five political protesters.

The International Federation of Human Rights (FIDH) presented the humanitarian crisis in Syria in 20 facts. International Criminal Lawyer Kip Hale wrote on the U.S Congress and accountability in Syria.