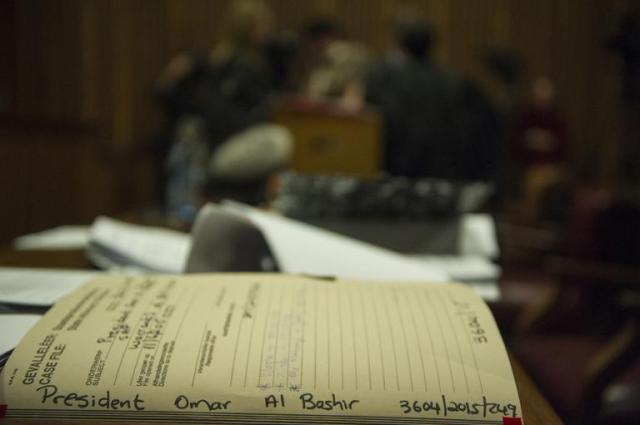 The case file against President Omar al-Bashir is pictured on the bench at the North Gauteng High court on June 15, 2015 in Pretoria © AFP, Mujahid Safodien.

In Global Justice news this week: An opportunity for South Africa to support for justice and accountability following ruling on al-Bashir, Serb nationalist Vojislav Seselj acquitted, new allegations of sexual abuse by peacekeepers appear in CAR, alarms raised in South Sudan and much more.

A top South African court ruled that the government erred in failing to arrest ICC fugitive Omar al-Bashir. This is an opportunity for the country’s authorities to renew support for justice and accountability, writes Angela Mudukuti of the Southern Africa Litigation Centre (SALC).

“The authorities should be using this case as an opportunity to reaffirm their commitment to the international criminal justice system and should work to perfect the admittedly flawed framework within which the ICC operates.”

Earlier this month, the supreme court of appeal in South Africa upheld a high court ruling—arising from an SALC petition—that the government was obliged – but failed to cooperate with the ICC’s arrest and surrender request for Sudanese president al-Bashir.

Serb nationalist Vojislav Seselj, accused of inciting crimes during the 1990s’ Balkan Wars, was this week acquitted on all charges at the International tribunal For the former Yugoslavia (ICTY). No Peace Without Justice said the verdict was unacceptable while Mark Ellis of the International Bar Association said judges had got it wrong.

Meanwhile, last week’s ICTY conviction of Radovan Karadžić has been in the spotlight this week. Though some considered it a hollow victory due to the tribunal’s decision to recognize Karadžić’s contribution to genocide in Srebrenica but not in other municipalities in Bosnia, most agreed the trial in fact demonstrated the difficulties in proving intent to commit genocide, which was at the heart of the judgment. Just Security was among those to outline the many significances of the verdict, including the warning it and the ICC conviction of Jean-Pierre Bemba Gombo sent out to leaders who use mass rape as a weapon of war.

Florence Hartmann, former spokesperson of the ICTY, was arrested on a warrant issued in November 2011 for contempt at the UN tribunal. A hundred Balkan rights groups, journalists, and activists declared their support for her while she remained in UN custody until her release on Tuesday.

Kenyan media suggested the recent UN tribunal conviction and 40-year sentence delivered upon Bosnian Serb leader Radovan Karadžić should demonstrate to African states that the ICC is not part of an anti-African justice system.

Central African Republic: The recent guilty verdict in the ICC trial of Jean Pierre Bemba Bemba case serves as an example of the conditions under which states can be expected to cooperate with the ICC. Lessons from and reactions to Bemba’s conviction. Further allegations of sexual abuse and exploitation by UN peacekeepers in CAR. The country  needs a Special Criminal Court to fill the impunity gap says civil society.

Darfur: Why is Darfur experiencing an upsurge of violence?

Kenya: Next week at the ICC, Kenyan Deputy President William Ruto and broadcaster Joshua Sang will learn the outcomes of their acquittal request and no case to answer motion. Both suspects have been excused from attending the ruling. Kenya opposed a provisional change in the ICC’s procedural rules permitting a single judge to conduct witness-tampering trials. Weak electoral and judicial institutions mean Kenya to continues to need the ICC. A history of ICC-Kenya relations.

Mali: ICC Pre-Trial Chamber I confirmed one war crime charge against Islamist Tuareg rebel Ahmad al-Faqi al-Mahdi and committed him to trial for his alleged role in the complete or partial destruction of mausoleums in Timbuktu, Mali. The accused informed the Court of his intention to plead guilty to the charge – a first for the ICC.

Nigeria: Human Rights Watch reminded Nigeria of its obligation under domestic and international law to protect its civilian citizens from widespread abuses by Boko Haram, including by securing the release of 400 women and children abducted by the militant group last year. The Islamic Human Rights Commission called on the ICC to probe alleged massacre on members of the Islamic Movement of Nigeria.

Comments on the Office of the Prosecutor’s draft policy paper on case selection and prioritisation.

Why is it so difficult to prosecute ISIS for genocide in relation to the alleged massacre of Yezidi people?

Kurdistan has reached out to international experts for training on the unearthing and documenting of mass graves in Shingal.

Former Bosnian foreign minister and ambassador to the UN Muhamed Sacirbey reflects on the state of international justice.

An analysis of last week’s achievements in the fight for global justice. Yet, many war criminal continue to evade justice.

Lawyers from Burundi have called for the ICC to investigate alleged extrajudicial executions by government forces as Burundi’s attorney general advised families of victims against cooperating with the Court.

The UN set up an expert panel to focus on accountability in North Korea. Michael Kirby reflected on prospects for justice.

The International Federation for Human Rights looks back at key moments in 2015 in a comic infographic.

Cases of grave crimes in Guatemala have been the source of both progress and controversy.

An insider look at the ICC’s new permanent premises.

This entry was posted in #GlobalJusticeWeekly, Al-Bashir, Darfur (Sudan), Europe. Bookmark the permalink.