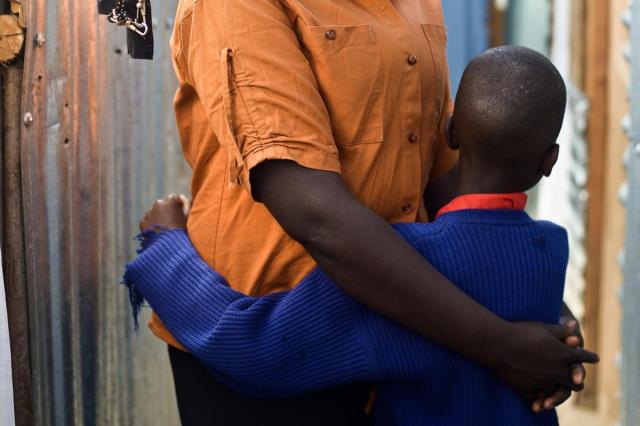 Kamere F. stands outside her house in a slum in Nairobi with her 7-year-old son born from rape committed during the 2007-8 post-election violence. Nairobi, 2015 © Samer Muscati/HRW

In Global Justice news this week: Victims of the post-election violence in Kenya keep struggling with trauma, civil society warned of escalating violence in Burundi, calls for more governmental cooperation rose in the light of ICC’s preliminary examination in Afghanistan and much more.

Human Rights Watch this week condemned Kenya’s thanksgiving rally for the end of the International Criminal Court trial of Deputy President William Ruto and broadcaster Joshua Sang, underlining that victims missing out on justice is no cause for celebration. A former Kenyan justice minister also criticised the ruling Jubilee party for polarizing the country.

President Uhuru Kenyatta said he will not hand over three men suspected of tampering with witnesses participating in the Kenya ICC cases as the government wants to prosecute them nationally. But authorities remain obliged to transfer the suspects to The Hague said Fergal Gaynor, victims’ lawyer in the ICC Kenyatta case.

With opposition legislators disapproving of Kenyatta’s pronouncement during the rally that Kenya was done with the ICC, Simon Allison of the Institute for Security Studies asks whether the termination of the Kenya cases could diminish the prospects of the country leaving the Rome Statute.

Meanwhile, witnesses told Kenya’s high court that victims of sexual and gender-based crimes during the 2007-8 post-election violence (PEV) remain traumatized. Journalists for justice writes of ICC Judge Chile Eboe-Osuji’s opinion that victims of the PEV are entitled to reparations from the Kenyan government. The idea is dismissed by some commentators, however.

Finally, in the week that saw Angelina Jolie Pitt visit the ICC Trust Fund for Victims to highlight the difficulties faced by survivors of grave international crimes, Kenyans for Peace with Truth and Justice called on the Trust Fund to conduct a long-awaited assessment into the Kenyan situation with a view to offering the PEV victims assistance in lieu of reparations. The civil society coalition also urged the Kenyan government to investigate and prosecute PEV perpetrators and to ensure victims eventually get justice.

Democratic Republic of Congo: The trial of former commander of the Union of Congolese Patriots Bosco Ntaganda this week heard the testimony of a former fighter of the group in closed session, a victim’s expectations for the trial. Meanwhile, one of Ntaganda’s lawyers has quit.

Uganda: Justice in Conflict’s symposium on the trial of former Lord’s Resistance Army (LRA) commander Dominic Ongwen this week focused on the weight the past experience of Ongwen as a child soldier may have on the trial, the plight of victim-perpetrators at the ICC and the shifting narratives on the effects of child soldiering in the Court’s jurisprudence.

Côte d’Ivoire: Former first lady Simone Gbagbo lost her final appeal in the country’s supreme court and is set to go on trial on charges of crimes against humanity.

Afghanistan: HRW and the Transitional Justice Coordination Group issued a letter to President Ashraf Ghani calling for more cooperation from the government with the ICC’s ongoing analysis of grave crimes in the country.

Nigeria: Amnesty International reported alleged unlawful killings by Nigerian military in Zaria and argued that the security forces attempted to conceal the evidence.

Civil society is this month calling on Guatemala to advance national legislation to end impunity for atrocities.

Cathal Gilbert from Open Democracy writes on the need for a greater international response to the rising tide of impunity and support for civil society.

In the light of the official opening of the permanent premises of the ICC this week, Over 30 ministers from nations around the world vowed to protect the Court from unfounded and unconstructive criticism.

The trial of former LRA rebel commander Thomas Kwoyelo will start in Uganda next month.

Evidence of alleged atrocities in the city of Daraya demonstrated the need for accountability in Syria.