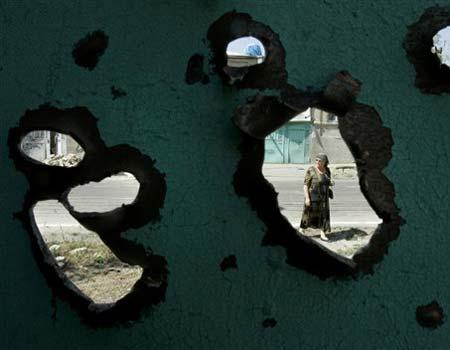 An Ossetian woman, seen through a bullet hole in the gates of a house, walks in Tskhinvali, capital of Georgian breakaway region of South Ossetia © AP

In the context of the ICC investigation into alleged grave international crimes during the 2008 armed conflict in Georgia, the International Federation of Human Rights (FIDH) and the Georgian Human Rights Centre (HRIDC) have called for better communication from the ICC with victims, and greater cooperation between national authorities and the Court.

Following an evaluation mission in the country, they found that victims not only faced economic, social, and psychological consequences stemming from the armed conflict, but also faced difficulty in acquiring victim status in national judicial proceedings. Likewise, victims’ lawyers have reported not having access to case files.

“There is a great need to reach out to victims and conflict affected communities to explain the mandate and possibilities of the ICC. The awareness of Georgian general public about the ICC should be raised and the capacity of Georgian authorities and civil society strengthened, which is essential for a meaningful impact of ICC proceedings at national level.”

“The importance of ICC investigation cannot be overestimated in the region. It sends the signal that disputed entities, like South Ossetia, cannot be zones of impunity and that those most responsible for these crimes must be held accountable.”

Democratic Republic of Congo: Lawyers representing Bosco Ntaganda in his trial at the ICC challenged last week’s evidence submitted by a former insider of the UPC.

The sociologist Peter Dixon looked into lessons learned on reparations from the cases of DRC and Colombia.

Uganda: Judges named in the case against Dominic Ongwen.

Burundi: Violence increases in Burundi, which the Washington Post describes as going down a dangerous path.

Colombia: Colombian political scientist Ariel Avila shared insights on the prospects of the peace accord between government forces and the guerrilla fighters of FARC.

Nigeria: Insights on the ICC’s preliminary examination in Nigeria.

Ukraine: New evidence has been submitted to the Office of the Prosecutor on alleged crimes committed by Russian military in eastern Ukraine while the status of the majority of displaced people during the conflict remains unknown.

The Africa Center for International Law and Accountability called for a reframing of international criminal justice in Africa, shifting the focus from the perpetrators to the victims, as the Institute for Security Studies wrote on the ability of national institutions across Africa to foster international justice.

The verdict on the trial of former Chadian dictator Hissène Habré before the Extraordinary African Chambers in Senegal for crimes against humanity, torture and war crimes is scheduled for May 30. Human Rights Watch issued a comprehensive Q&A on the case.

Key hearings began in Guatemala against high-ranking military officials charged with war crimes committed in the 1980s. The retrial of former military dictator Efrain Rios Montt, charged with genocide, has been suspended.

Four men were sentenced to death in Bangladesh for crimes against humanity.

A Sarajevo documentary shows how culture was an act of resistance while the city was under siege from 1992 to 1995.

Accused war criminals give their thoughts on international justice.

On World Press Freedom Day, civil society raised concerns about the danger of being a journalist in conflict.

The UN Security Council adopted a resolution demanding that hospitals and clinics be protected in war zones. UN officials said that attacks should be considered as war crimes.

This entry was posted in #GlobalJusticeWeekly, georgia, Uncategorized. Bookmark the permalink.