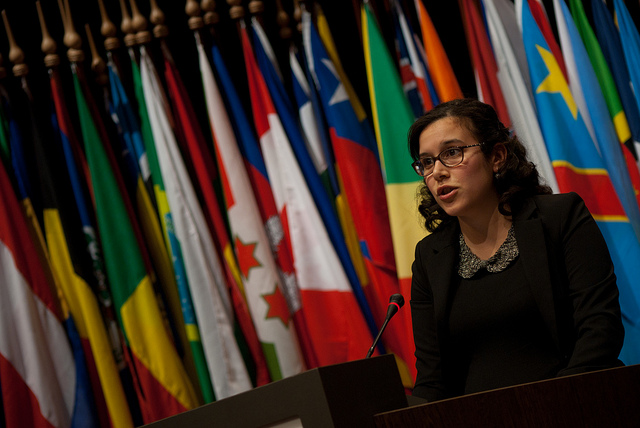 Al-Haq representative to the International Criminal Court Nada Kiswanson at the 12th session of the Assembly of States Parties to the Rome Statute. © CICC

Death threats for activist working on Palestine-ICC in The Hague

Dutch newspaper NRC Handelsblad last week broke the story of ongoing death threats to human rights activist Nada Kiswanson related to her work advocating for justice for grave crimes in Palestine at the International Criminal Court (ICC) in The Hague. As the ICC representative of Coalition member Al-Haq, Kiswanson relays information towards the ICC Office of the Prosecutor’s examination into alleged grave crimes in the occupied Palestinian territory.

The Coalition denounced the attacks as hate crimes, calling for those responsible to be brought to justice and for Dutch authorities to do more to meet their obligations, as the host state to the ICC, to protect international justice advocates in the Netherlands.

“The Coalition for the International Criminal Court comprises thousands of NGOs, tens of millions of supporters; an attack on any of our members is a threat to all of us. The Coalition will continue to defend all ICC advocates and it is vital that the Dutch authorities and the ICC continue to protect all who strive for international justice to prevail,” said Coalition Convenor William R. Pace.

Al-Haq, Open Society Justice Initiative, Parliamentarians for Global Action, the Observatory for the Protection of Human Rights Defenders (Observatory), and Amnesty International all issued statements condemning the attacks. The Observatory issued an urgent appeal to Israeli authorities to investigate the matter.

In an NRC interview, ICC Registrar Herman von Hebel acknowledged the vital contributions by NGOs and human rights defenders to the ICC’s investigations and preliminary examinations and noted the Netherlands’ obligation as host state to guarantee the safety of those facilitating the Court’s work.

Kenya: Expert argues that government should have been more vigilant in preventing sexual violence after 2007 elections, and three additional lessons from ICC’s Kenya “debacle”

Expert calls on ICC, UN, and AU to cooperate toward justice for children of conflict in South Sudan

France concerned by reports of a deadly chemical attack in Aleppo. Experts warn that such attacks may normalize war crimes in Syria