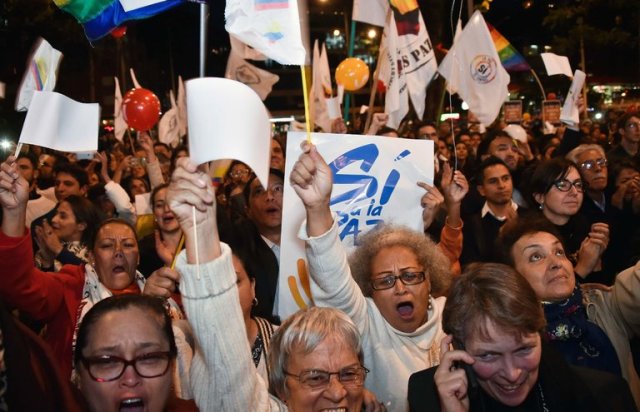 The international community has broadly welcomed the long-awaited peace agreement between the Colombian government and the FARC rebel group, which promises an end to over 50 years of brutal conflict. But will the deal ensure Colombia fulfills its obligations as an International Criminal Court (ICC) member state to investigate and prosecute perpetrators of grave crimes?

Alleged war crimes and crimes against humanity by government forces, armed guerrilla groups, and paramilitaries have been the subject of an ICC preliminary examination since 2004, intended to determine whether a full investigation is warranted. The ICC prosecutor has been monitoring the peace process to ensure the delivery of genuine justice under the Rome Statute principle of complementarity, which requires authorities in ICC member states to investigate and prosecute grave crimes in the first instance.

In December 2015, negotiators published a 75-point plan detailing how justice for grave crimes committed during the conflict would be implemented as part of the wider peace agreement. A Special Jurisdiction for Peace is to be established to prosecute conflict-related grave crimes committed by all sides. While explicitly excluding amnesty for war crimes and crimes against humanity, the agreement envisages reduced and/or alternative sentences, such as house arrest, for perpetrators who confess to crimes and contribute to establishing truth.

The issue of sentencing has proven contentious. Human Rights Watch this week said the agreement was flawed and could lead to impunity for those responsible for human rights abuses and war crimes. Amnesty International said it had serious doubts about whether the deal will effectively guarantee victims’ rights to truth, justice, and reparations in line with international law and standards.

However, the Colombian Commission of Jurists welcomed the deal. Colombian human rights group HUMANAS meanwhile called on “the men and women of this country to say ‘yes’ to peace,” when the agreement is put to popular referendum in October.

The government and the FARC have proposed the participation of Pope Francis, UN Secretary-General Ban Ki-Moon, the Criminal Chamber of Colombia’s Supreme Court, the International Center for Transitional Justice, and the Standing Committee of the State University System when selecting judges for Colombia’s special peace tribunals.

On the Verge of Peace: Colombia Reaches Final Agreement with the FARC (Crisis Group)

A peace agreement and challenges ahead (Chatham House)

Colombia: Will peace accord deliver justice for grave crimes?

Philippine’s president Duterte can be held liable under ICC

Can the law correct the colonial past? 100 Years after Balfour Declaration, Palestinians threaten to Sue