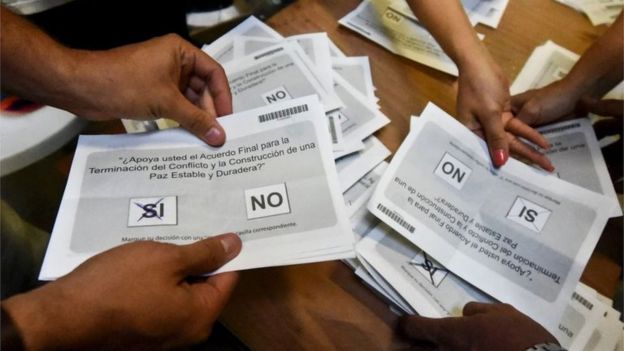 Civil society is calling for continued negotiations to end Colombia’s decades-long conflict following the rejection by referendum of President Santos’ peace deal with the Revolutionary Armed Forces of Colombia (FARC).

Justice for perpetrators of atrocities during the civil war remains one of the main sticking points in the negotiations – an issue at the center of the International Criminal Court prosecutor’s continuing preliminary examination in the country.

Last week’s referendum narrowly rejected the peace deal between, falling short by fewer than 54,000 votes. With a voter turnout of less than 38%, the referendum outcome came as a surprise to many.

The peace accord was the product of four years of negotiations in Havana between the Colombian government and FARC rebels. In recognition of these efforts, President Santos was awarded the Nobel Peace Prize for his efforts to bring an end to the decades-long conflict.

Civil society welcomed the award as a recognition of all those working towards peace, while urging both the government and the FARC to continue negotiations towards a new deal that can resolve concerns raised by the referendum’s outcome.

Kenya: Impact and implications of referring Kenya to the ICC Assembly of State Parties

Libya: UN envoy calls for pause in fighting near Benghazi as situation worsens

Palestine: Security concerns among factors keeping ICC delegation out of Gaza during their visit to Israel and Palestine

Exchange of fire continues on Pakistan and India border