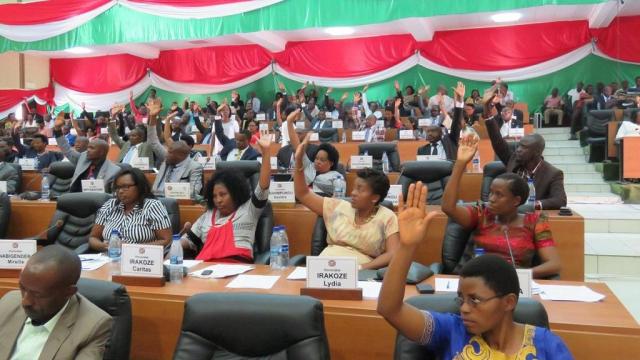 Today’s vote by Burundi’s national assembly to withdraw from the Rome Statute of International Criminal Court (ICC) is a regressive move that threatens efforts to bring peace, justice, stability and the rule of law to a country in the midst of a serious violent and political crisis, said the Coalition for the ICC today.

“This vote is a terrible setback to a country that is facing a serious violent and political crisis. It comes at the very moment that thousands of Burundians thirst for fair, effective and independent criminal justice – as demonstrated by the families of victims that broke their silence and seized the ICC when their cries for justice were ignored by the national justice system,” said Lambert Nigarura, chairman, Burundi national coalition for the ICC. “The vote of the senate and promulgation of the law by the president will be a mere formality given the current pace of developments. But victims of the crisis can be reassured that this move will have no impact on the ICC prosecutor’s continuing preliminary examination.”

The lower house is dominated by the ruling party of President Pierre Nkurunziza. Civil society and others have long been calling for accountability for alleged acts of killing, imprisonment, enforced disappearances, torture, rape and other forms of sexual violence allegedly committed during a conflict between supporters of President Nkunrunziza and those who believe that his re-election in July 2015 for a third term violated the nation’s constitution.

In a move welcomed by the families of suspected disappeared and civil society, the ICC  prosecutor opened a preliminary examination in April 2016 into the situation in Burundi to determine whether reports of grave international crimes since April last year warrant the opening of a full investigation.

“Human rights and democracy advocates in Burundi will oppose their government withdrawing.  Seeking immunity for the worst crimes in international law is the worst failure of political leadership.” William R. Pace, convenor, Coalition for the ICC. “Burundi civil society is clear that their government is withdrawing from democracy, human rights and the rule of law, not the ICC. The ICC remains one of the world’s most powerful answers to the age-old plague-spot of ‘strong man rule.’”

While there has been a push among some African countries to withdraw from the ICC, no state has actually done so. In fact, this year’s meeting of the African Union saw several states oppose a motion for withdrawal en masse, the first time in many years the AU had failed to do so. Meanwhile, only this month Gabon asked for ICC assistance with crimes committed in the context of electoral violence.

“The voices of victims are often lost in the ‘ICC targeting Africa’ rhetoric and in discussions calling for head of state immunity. If states pull out from the ICC, a key avenue for justice for millions of people will be lost,” said Stephen Lamony, head of advocacy and policy, Coalition for the ICC.

The ICC withdrawal bill will now move to the senate and presidential office for final approval. The next step would be for the government of Burundi to write to the UN Secretary General and the UN Office of Legal Affairs with notification of its intent to withdraw from the Rome Statute. Under the Rome Statute, full withdrawal comes into effect one year after notification to the UN treaty office.

“This vote is alarming as it threatens not only the rights of the Burundian people to justice but also the longevity of the country’s international commitment to peace through justice. Civil society urges Burundian law makers to reconsider voting to leave the ICC,” said Clement Capo-Chichi, Africa regional coordinator of the Coalition for the ICC. “The recent decision to ban three UN human rights investigators from entering the country raises the question of whether victims will receive justice if Burundi decides to actually leave the ICC.”

Background on Burundi and the ICC

Burundi ratified the Rome Statute on 21 September 2004. Burundi has experienced several ethnic conflicts, genocides, and civil wars since the 1970s, which have resulted in chronic underdevelopment and poverty. Most recently, the country slid into political crisis after President Nkurunziza won a third term as president, which many have called unconstitutional. Since he announced his candidacy in April 2015, Burundi has seen violent street protests, forced disappearances, and assassinations, leaving hundreds dead and prompting over 200,000 people to flee the country. The African Union has been among those to criticize President Nkurunziza’s third term.

The ICC is the world’s first permanent international court to have jurisdiction over war crimes, crimes against humanity, and genocide. Central to the Court’s mandate is the principle of complementarity, which holds that the Court will only intervene if national legal systems are unable or unwilling to investigate and prosecute perpetrators of genocide, crimes against humanity and war crimes.

There are currently ten active investigations before the ICC: the Central African Republic I & II; Democratic Republic of Congo; Darfur, Sudan; Kenya; Libya; Uganda; Côte d’Ivoire; Mali and Georgia. The ICC has publicly issued 33 arrest warrants and nine summonses to appear. Four trials are ongoing. There have been two convictions and one acquittal. Eight preliminary examinations currently ongoing, including into situations in Afghanistan, Burundi, Colombia, Guinea, Palestine, Iraq/UK, Nigeria and Ukraine. The OTP has concluded preliminary examinations relating to Honduras, Venezuela, Palestine, the Republic of Korea and the Comoros referral, declining in each case to open an investigation.

The Burundian Coalition for the International Criminal Court brings together human rights activists and NGOs working towards ratification of the Rome Statute of the ICC and full implementation of the Statute in national laws.

Q&A with the Burundi Coalition for the ICC

This entry was posted in Burundi. Bookmark the permalink.