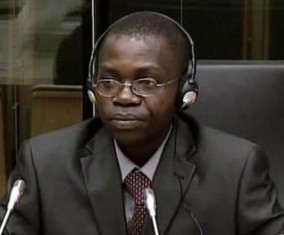 A witness testifies in the case against Germain Katanga and Mathieu Ngudjolo Chui. © iLawyer

After a lengthy legal battle, three ICC witnesses who had sought asylum in the Netherlands were sent back to the Democratic Republic of Congo (DRC) on 6 July.

It is believed that Congolese authorities have detained the three witnesses, who had testified in defense of Germain Katanga and Mathieu Ngudjolo Chui.

Civil society reacts
On 27 June, the highest Dutch court, the State Council, denied the asylum applications made by the witnesses and authorized their return to the DRC.

Some Coalition members, including Amnesty International and Human Rights Watch, strongly opposed the return of the witnesses, arguing that they faced a real risk of persecution and violation of fair trial rights in the DRC.

“With a strong risk that the witnesses won’t get a fair trial in Congo, the Dutch government shouldn’t be complicit by sending them back.”

The Dutch Court denied the asylum applications primarily due to the guarantees made by Congolese authorities to the ICC regarding these witnesses, including that the death penalty would not be applicable to them and that the pending national proceedings against them would move forward. The ICC was also given assurances that the three witnesses would not face torture or ill treatment, with safeguards including weekly visits by the ICC Victims and Witnesses Unit.

However, Amnesty International questioned the Dutch court’s decision to rely on unenforceable, bilateral assurances given to a third party, in this case the ICC.

“Amnesty International has protested against the return of these detained witnesses and calls on the ICC and the authorities in the Democratic Republic of the Congo to ensure that all necessary protective measures are in place when they arrive in Kinshasa. The ICC has a duty to monitor the wellbeing of these men when they return home and to ensure the local authorities live up to their promises to protect the men from human rights violations. The Congolese justice system must cooperate.”

Instead, on 12 May 2011, the witnesses filed asylum applications before the Dutch courts, saying that they feared persecution on return to the DRC due to allegations made while providing testimony that implicated the current president of DRC, Joseph Kabila, in crimes allegedly committed in the Ituri region.

On 20 January 2014, the ICC Appeals Chamber ruled that the witnesses should be returned to the DRC, but that the Dutch authorities that were processing their asylum applications must be consulted beforehand.

The Dutch authorities agreed to host the witnesses until the decision on their asylum applications was made. On 4 June, following an Appeals Chamber order, the witnesses were transferred to Dutch custody.

This entry was posted in Democratic Republic of Congo, Katanga and tagged asylum, DRC, The Netherlands, Witnesses. Bookmark the permalink.