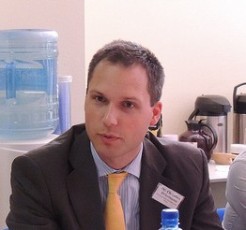 In this interview, Dr. Christian Behrmann, EU focal point on the ICC in the European External Action Service (EEAS), describes the EU’s role in the global fight against impunity.

What is the role of the EU Focal Point?

The strong EU policy in support of the ICC has a firm institutional foundation in a detailed 2011 Council Decision (2011/168/CFSP) and a 2011 Action Plan on its implementation.  The EU Focal Point is based in the EEAS and assists in ensuring effective co-ordination and consistency of information, and in adequately preparing the programs and activities of the Union in the implementation of the Decision.  For this purpose, the EU focal point establishes appropriate contacts and exchange of information from all relevant actors and sources, including the ICC and other international organizations, third countries and nongovernmental organizations.

How does the EU/EEAS mainstream the ICC and the fight against impunity within other EU foreign policies?

On the basis of Council Decision 2011/168/CFSP, the EU mainstreams its policy on the ICC in all its external actions, with a view of supporting the ICC both politically and diplomatically, as well as logistically and financially.  In bilateral relations, the importance of supporting the ICC is—by way of example—raised with third countries as appropriate at political dialogue meetings and summits.  At a multilateral level, EU support to the ICC is expressed, for example, within the framework of the United Nations.  Given states’ primary duty to investigate grave international crimes, the EU is particularly engaged in promoting and contributing to strengthening the capacity of national judicial systems to investigate and prosecute these crimes in line with the Rome Statute’s principle of complementarity.  Also, since 2003, after the Rome Statute came into force, the EU has provided funding of more than € 30 million to the global ratification campaigns undertaken by civil society organizations, in addition to projects of the ICC.

What’s the role of EU member states in implementing the agreed common policy on the ICC and principles on the ICC?

Last year, the EU published a “toolkit” to advance the principle of complementarity to bridge gaps between international and national justice. How does the EU support domestic efforts to end impunity in practice?

The EU and its member states are committed to promoting the implementation of the Rome Statute.  All EU member states have put in place legislation necessary to implement the Rome Statute and exchange information on their experience with this legislation on a regular basis.  But we take also initiatives to promote the implementation of the principle of complementarity outside our boundaries.  To this end, the European Commission and EEAS have established an internal Joint Staff Working Document on Advancing the Principle of Complementarity, which aims at bridging the gap between international and national justice.  Implementing this “Complementarity Toolkit,” the EU offers operational guidelines to EU staff in EU delegations and at the EU headquarters on how to make the principle of complementarity work at the national level while respecting the Rome Statute.  The EU equally suggests operational entry points for intervention in the area of criminal justice and the rule of law in order to promote the principle of complementarity in country-specific situations.

The EU is well known for promoting the universality of the Rome Statute around the world, a key issue for the Coalition and many members around the world. What are your main contributions and are there specific countries the EU is currently focusing its efforts on?

The EU’s ongoing engagement towards the universality of the Rome Statute and promoting a better understanding of the ICC’s mandate is a concrete example of the EU’s political support of the Court.  The EU continues to make every effort to further this process with third states, in particular during its regular human rights dialogues with some 40 countries, through systematic demarche campaigns worldwide, through the organization of dedicated local or regional seminars, through the systematic inclusion of an ICC clause into agreements with third countries, or through financial support to civil society organizations lobbying for the universality of the Rome Statute.  ICC clauses are also included in European Neighborhood Policy (ENP) Action Plans.  Achieving the widest participation in the Rome Statute is also an EU objective during enlargement negotiations and the accession phases of countries with an EU perspective, as adherence to the values of the Rome Statute and its ratification are part of the “acquis communautaire” to be fulfilled prior to becoming a member of the EU.

One of the key challenges that the Court is facing is the lack of cooperation it receives. What can the EU and its member states do to address that issue?

Last year, civil society from around the world attended the 15th EU-NGO Forum and called on the EU to prioritize and support victims of international crimes. What does the EU do in this area?

When the Rome Statute was adopted in 1998, the prospect of ending impunity was not the sole concern of the states and NGOs negotiating the treaty.  Of equal importance were concerns about victims and affected communities, as well as witnesses.  The EU and its member states remain committed to continue supporting victims’ participation under the Rome Statute and contribute to optimizing the current system.  Keeping witnesses safe is a keystone of successful prosecutions.  Entering into voluntary agreements with the Court on the re-location of witnesses and interim release can be a way states parties can assist the Court this task.  The EU and its member states will continue to support the important work of the Trust Fund for Victims.

The EU has been a strong supporter of the ICC and of ending impunity outside its borders for years now, does it have a similar policy/strategy within the EU?

The ICC remains complementary to national systems of criminal law. In the Council Common Position on the ICC, the EU member states expressed their determination to work together to combat certain forms of crime. For this reason, the Council adopted a decision in 2002 setting up a European network of contact points in respect to persons responsible for genocide, crimes against humanity and war crimes. The purpose of this decision is to make cooperation between the member states in combating those crimes more efficient and to designate a relevant contact point within the police and justice systems of each member state.  Each member state has designated a national contact point for the exchange of information concerning the investigation of genocide, crimes against humanity and war crimes. The contact points will provide information upon request or on their own initiative. The investigation and prosecution of genocide, crimes against humanity and war crimes continue to be the responsibility of national authorities.

2 Responses to EU a key player in ICC system